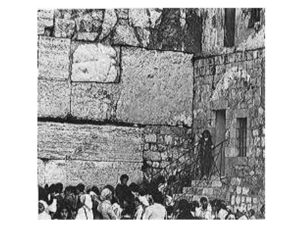 Women for the Wall founder Leah Aharoni says EU working with left-wing groups to destroy Israeli religious community from within.

“Twenty-five years ago, I was a young, 20-something-year-old woman, and I got an opportunity to join a program to learn more about democracy and leadership,” Aharoni said. “We got together, about 30 young women, all of us from the religious community, and we got a 500 shekel monthly scholarship that we got in cash in an envelope. And every week we would have a meeting with another thought leader. But what happened was the thought leaders all had the same thoughts. They were all left-wing and pretty radical.”

She said that the meetings took place with people from Israel and Europe who called the Jewish communities in Judea and Samaria “evil” and alleged oppression of religious Jewish women.

“After a few weeks we figured out what was going on, and we asked where the money was coming from. Where was that money in cash coming from? And we didn’t get an answer.

“After two years, it came out that the sponsor was the European Union, and the idea was to brainwash a small but high-quality group of men and women in the religious community and have them spread these ideas inside the community,” she said.

“This is the method that the New Israel fund and the European Union have used in the religious and haredi communities ever since. What’s the idea? They find young, idealistic people who have important issues that they would like to advance in the community. They give them training. They give them funding. And then they make them part of this ecosystem. And this group of young, religious, idealistic leaders are now becoming a Trojan Horse who are now advancing leftist,liberal, and sometimes anti-religious values inside the religious community.