Former Chief Rabbi of British Mandate Palestine, Rabbi Avraham Kook pointed out (Chazon HaGeula p. 222) that winning a War to Conquer the Land of Israel takes precedence even if it means endangering Jews for the sake of victory.

Even for the sake of an Optional War, the Torah recognizes there might be war casualties as part of the price of victory.
Dvarim/Deuteronomy 20:7 ‘Is there any man among you who has betrothed a woman and not married her? Let him go home, so that he not die in war and have another man marry her.’

See also the book of Shoftim/Judges 20:39 as a backup to this concept.

The principle that winning the war to conquer the land of Israel overrides the commandment of saving lives, also explains one of the motivations of my rabbis, to oppose the various “Land for Peace” deals including Trump’s “Deal of the Century” and it also explains why they rejected the Gilad Shalit prisoner swap. I am not saying this is the only reason, just one of the reasons.

My rabbis further added that when Rabbi Kook wrote Chazon Haguela, there was a realistic chance for gaining more land for the Jewish people in Israel by the purchase of land. Therefore Rabbi Kook supported that activity. However, during that period of time Rabbi Kook did not believe, there was a realistic chance for a Jewish army to take the land of Israel by force. That is why he did not encourage the latter option in that period.
In letter 6 in my exchange of letters with Rabbi Neventzal on the issue of the Temple Mount, I bring evidence that Rabbi Kook was indeed on the side of the Religious Zionists that ascend the Mount after immersion in a mikva. I should add, my former study partner, Rabbi Hillel Ben Shlomo prefers adding the stringency of “Haarev Shemesh” (hinted at in Leviticus 22:7).

Appendix: From the words of Rabbi Yehuda Kroizer [Yibaneh
Hamikdash, issue 225, page7].
Rabbi Avraham Yitzchak Kook and Rabbi Tzvi Yehuda Kook and Ascent to the Temple Mount
The opponents of ascent to the Temple Mount usually rely on the reply of Master Authority Rabbi Kook, Z.T.L. in Mishpat Cohain (96) that seemingly disallowed entrance to the Mount, however, this is not so. Rabbi Eliyahu Shlomo Raanan, Z.T.L., HY”D, the grandson of the Rabbi Avraham Yitzchak Kook  Z.T.L. publicized the following call and thus he wrote:

I join in this the call of Rabbis who recommend in favor of ascending the Temple Mount, in the permitted areas, for it is a matter without any shade of doubt that my grandfather our Rabbi, Avraham Yitzchak Kook and his son Rabbi Tzvi Yehuda did not forbid ascending to the permitted areas, and certainly it is a big mitzva to conquer the place of the Temple from the hands of strangers, however, only in the permissible manner. Behold I now sign: the grandson of the Master Authority, the honorable Rabbi Z.T.L., Eliyahu Shlomo Raanan Kook (Sefer Hazikaron of Rabbi Shlomo Raanan ,HY”D,
“Neshama Shel Shabbat”).
There also it told about him: Rabbi Shlomo learned the book, Mishpat Cohain, with Rabbi Tzvi Yehuda, Z.T.L.; in the book there is an extensive reply on the matter of the Temple Mount. Rabbi Shlomo understood from Rabbi Tzvi Yehuda, that in our days the conditions have changed, and therefore he ascended the Temple Mount from time to time, to the permitted places.

In letter #4 Topic 12 and Letter #5 to Rabbi Avigdor Neventzal shlit”a I bring further evidence that this was the position of Rabbi Avraham Kook and his son Rabbi Tzvi Yehuda Kook, see there for details.

If this is Correct Why Only about Half of the Rabbis in the Religious Zionist Camp Support Ascent to the Temple Mount?

At the height of the second intifada violence by Muslim fanatics and P.L.O. terrorists, the author of this post asked the head of Mercaz Harav Yeshiva and a former Ashkenazi Chief Rabbi of the State of Israel for a Psak Halacha regarding ascent to the Temple Mount. That is to say I asked Rabbi Avraham Shapira.

He told me if he knew where it is permitted to ascend it would be a mitzva to ascend, however, he himself lacked the clarity about the boundaries between the permitted sections and the forbidden sections and therefore told me not to go to any part of the Mount. He did however, at the same time judge those that ascend the Mount for the benefit of the doubt, by saying, “they apparently know”.

The author has written a new extensive article which is still being reviewed by major rabbis of the Religious Zionist world. I bring new archaeological, scientific and historical proof for the location of the Temple which has become available. Therefore it is legitimate to claim that if Rabbi Shapira would still be living today and had the information that we have now, he would have supported ascending the Mount. At least some Religious Zionist Rabbis share my view. I should point out that at this point in time I have not yet received the endorsement that I am seeking, so my viewpoint should be considered at this point in time as just a theory.

The True Western Wall of the Temple Mount

For part of the evidence that the Kotel is not the true Western Wall of the Temple Mount, see: New Theory on When Western Wall Was Built

The discovery of a new ritual pool under the Western Wall suggests a new theory that the Kotel was completed later than thought.

There I provide a more extensive explanation why the Wailing Wall (Kotel) cannot be the true Western Wall of the Temple Mount.

In my English post : A Critique of Architect, Tuvia Sagiv’s Temple Mount Theory

I provide the latest evidence against the theory of Architect, Tuvia Sagiv, who claims the Temple was on the southern side of the Mount Moriah.

Appendix: A Hint for the Scholars. 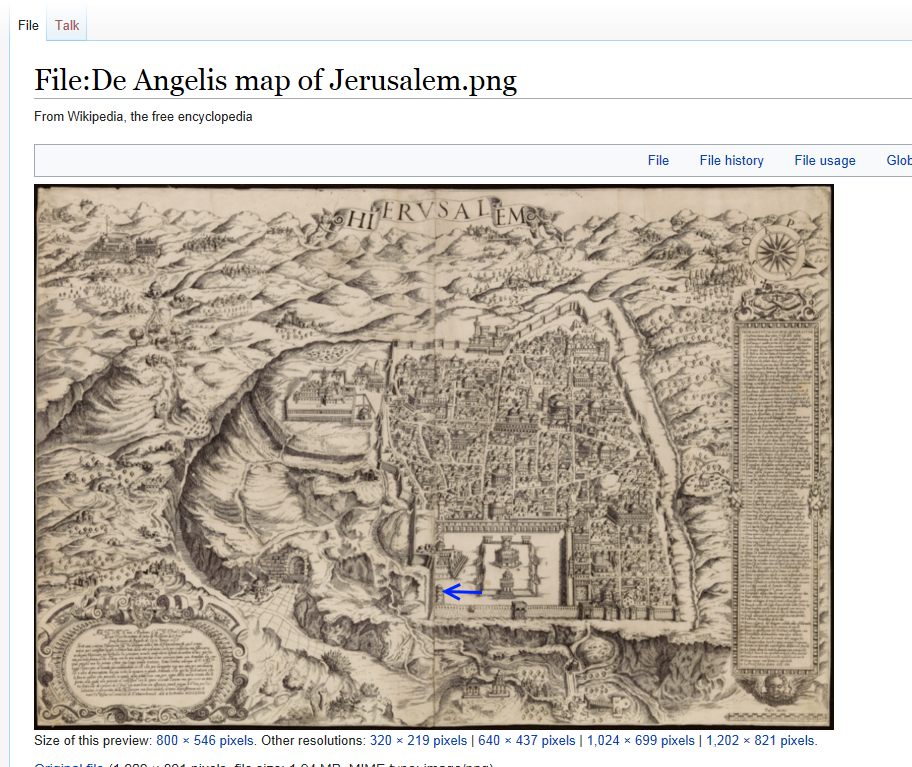 The above pictures are just an advertisement for my article, when G-d willing, and bli neder, it is published.

Appendix #2 The simplest reading of Radbaz has him placing the western wall of the  sanctified Temple Mount on the upper platform of the Temple Mount (much closer to the rock of the Dome of the Rock) and not at the place of the red circle in one of the maps above. Elsewhere, I discuss both views.

Appendix #3 A small minority of Rabbi Kook’s followers, believe that the normal rules regarding the conquest of the land of Israel do not apply to the Temple Mount. Some rabbis connected to the Har Hamor Yeshiva abide by this minority viewpoint. It fits the interests of Rabbi Yitzchak Yosef to inflate the number of Religious Zionists that belong to this faction.

Appendix #4 – 26th Sivan 5782 The yellow dots in the picture below, is the Temple Mount route (according to https://www.inn.co.il/news/445258 ) approved by Rabbi Dov Lior, for people who have undergone the necessary purification. I do not know if Rabbi Shapira would have approved of the same boundaries, even if he had known about the new proofs against Rabbi Goren’s Theory (who moved the Holy of Holies to the north because he assumed the Wailing Wall, was the Halachic Western Wall of the Temple Mount) and Tuvia Sagiv’s southern theory. I do not take the responsibility to decide such issues.