Translation of the Prophetic Vision of Yechezkel / Ezekiel Ch. 37 by Sefaria.org 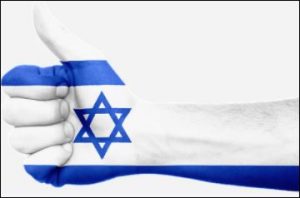 1 The hand of the LORD came upon me. He took me out by the spirit of the LORD and set me down in the valley. It was full of bones.
2 He led me all around them; there were very many of them spread over the valley, and they were very dry.
3 He said to me, “O mortal, can these bones live again?” I replied, “O Lord GOD, only You know.”
4 And He said to me, “Prophesy over these bones and say to them: O dry bones, hear the word of the LORD!
5 Thus said the Lord GOD to these bones: I will cause breath to enter you and you shall live again.
6 I will lay sinews upon you, and cover you with flesh, and form skin over you. And I will put breath into you, and you shall live again. And you shall know that I am the LORD!”
7 I prophesied as I had been commanded. And while I was prophesying, suddenly there was a sound of rattling, and the bones came together, bone to matching bone.
8 I looked, and there were sinews on them, and flesh had grown, and skin had formed over them; but there was no breath in them.
9 Then He said to me, “Prophesy to the breath, prophesy, O mortal! Say to the breath: Thus said the Lord GOD: Come, O breath, from the four winds, and breathe into these slain, that they may live again.”
10 I prophesied as He commanded me. The breath entered them, and they came to life and stood up on their feet, a vast multitude.
11 And He said to me, “O mortal, these bones are the whole House of Israel. They say, ‘Our bones are dried up, our hope is gone; we are doomed.’
12 Prophesy, therefore, and say to them: Thus said the Lord GOD: I am going to open your graves and lift you out of the graves, O My people, and bring you to the land of Israel.
13 You shall know, O My people, that I am the LORD, when I have opened your graves and lifted you out of your graves.
14 I will put My breath into you and you shall live again, and I will set you upon your own soil. Then you shall know that I the LORD have spoken and have acted”—declares the LORD.

The Gemara suggests: And let us derive from the dead that Ezekiel revived (see Ezekiel, chapter 37) that the resurrected dead will not live forever, but will die at some point. The Gemara explains: The school of Eliyahu holds in accordance with the opinion of the one who says: In truth, Ezekiel’s depiction of the dry bones that came to life was a parable, from which nothing can be derived with regard to the nature of resurrection.

This is as it is taught in a baraita, that Rabbi Eliezer says: The dead that Ezekiel revived stood on their feet and recited song to God and died. And what song did they recite? The Lord kills with justice and gives life with mercy. Rabbi Yehoshua says that it was this song that they recited: “The Lord kills, and gives life; He lowers to the grave and elevates” (I Samuel 2:6). Rabbi Yehuda says: Ezekiel’s depiction of the dry bones that came to life was truth and it was a parable.

Rabbi Neḥemya said to Rabbi Yehuda: If it was truth, why do you refer to it as a parable, and if it was a parable, why do you refer to it as truth? Rather, it means: In truth, it was a parable. Rabbi Eliezer, son of Rabbi Yosei HaGelili, says: Not only was it not a parable, the dead that Ezekiel revived ascended to Eretz Yisrael and married wives and fathered sons and daughters. Rabbi Yehuda ben Beteira stood on his feet and said: I am a descendant of their sons, and these are phylacteries that my father’s father left me from them.

The Gemara asks: And who are the dead that Ezekiel revived?

Rav says: These were the descendants of Ephraim who calculated the time of the end of the enslavement and the redemption from Egypt and erred in their calculation. They left before the appointed time and were killed, as it is stated: “And the sons of Ephraim; Shuthelah, and Bered his son, and Tahath his son, and Eleadah his son, and Tahath his son. And Zabad his son, and Shuthelah his son, and Ezer and Elead whom the men of Gath that were born in the land slew, because they came down to take their cattle” (I Chronicles 7:20–21), and it is written: “And Ephraim their father mourned many days, and his brothers came to comfort him” (I Chronicles 7:22).

And Shmuel says: These dead that Ezekiel revived were people who denied the resurrection of the dead, as it is stated: “Then He said to me: Son of man, these bones are the whole house of Israel; behold, they say: Our bones are dried and our hope is lost; we are cut off” (Ezekiel 37:11). God tells Ezekiel that these were people who had lost hope for resurrection.

Rabbi Yirmeya bar Abba says: These were people in whom there was not even the moist residue of a mitzva, as it is stated: “The dry bones, hear the word of the Lord” (Ezekiel 37:4). Even during their lifetime they were comparable to dry bones.

Rabbi Yitzḥak Nappaḥa says: These are the people who covered the Sanctuary with repugnant creatures and creeping animals, as it is stated: “So I entered and saw and behold, every form of creeping animal and repugnant animal, and all the idols of the house of Israel, etched upon the wall around” (Ezekiel 8:10), and it is written there with regard to the prophecy of the dry bones: “And he passed me over them around and around” (Ezekiel 37:2). By means of a verbal analogy between: Around, in one verse and the identical term in the other it is derived that the two verses are referring to the same people.

Rabbi Yoḥanan says: These are the dead from the Dura Valley (see Daniel, chapter 3). And Rabbi Yoḥanan says: These corpses filled the area from the Eshel River to Rabat, which constitutes the Dura Valley. As, at the time that Nebuchadnezzar the wicked exiled the Jewish people to Babylonia, there were among them youths who overshadowed the sun with their beauty, and the Chaldean women would see them, and desire them, and discharge the flow of a zava. These women told their husbands, and their husbands told the king. The king ordered the youths executed, and his servants executed them. And their execution did not resolve the problem, as the women were still discharging the flow of a zava. Even after death, the youths’ beauty remained intact. The king ordered that their corpses be taken to the valley, and his servants trampled them so that their form would no longer be visible.

§ The Sages taught in a baraita: At the moment that Nebuchadnezzar the wicked cast Hananiah, Mishael, and Azariah into the fiery furnace, the Holy One, Blessed be He, said to Ezekiel: Go and revive the dead in the Dura Valley. Once Ezekiel revived them, the bones came and struck Nebuchadnezzar, that wicked man, in his face. Nebuchadnezzar said: What is the nature of these? His servants said to him: The friend of these three, Hananiah, Mishael, and Azariah, is reviving the dead in the Dura Valley. Nebuchadnezzar began and said: “How great are His signs and how mighty are His wonders; His kingdom is an everlasting kingdom and His dominion is from generation to generation” (Daniel 3:33).

Rabbi Yitzḥak says: Molten gold should be poured into the mouth of that wicked person. His mouth should be sealed in the course of an extraordinary death; in deference to royalty, Rabbi Yitzḥak suggested that gold would be used to accomplish that task. The reason is that if an angel had not come and struck him on his mouth to prevent him from continuing his praise, he would have sought to overshadow all the songs and praises that David recited in the book of Psalms.

The Sages taught in a baraita: Six miracles were performed on that day that Hananiah, Mishael, and Azarya were delivered from the furnace, and they are: The furnace rose from where it was sunken to ground level; and the furnace was breached; and its limestone dissipated; and the graven image that Nebuchadnezzar established, which he commanded his subjects to worship (see Daniel 3:5–6), fell on its face; and four ranks of officials from monarchies, who stood around the furnace, were burned; and Ezekiel revived the dead in the Dura Valley.

And the knowledge that all of the miracles were performed is based on tradition.

Therefore there is no contradiction between this post and another post on this site which explains the scenario of The Messiah Coming In a Generation That is Completely Liable [For Extinction] – The Vilna Gaon Explains on What Point Are They Liable
Elsewhere in his commentaries to mystical writings the Vilna Gaon predicts the leaders and judges of the Jewish people before the spiritual redemption would be robbers and bribe takers and would try to take actions to drive a wedge between the Jewish people and Hashem.