Even in modern times, we see the same pattern. Despite the common misconception that the nations “gave” us Eretz Yisrael out of guilt over the Holocaust, in fact, they made that decision some 25 years earlier.

Jews had been returning and settling the land in earnest since the first group of the Vilna Gaon’s students arrived in 1809. The aims of the Zionist movement reached the high levels of leadership in the British government which merited to liberate the Holy Land from the Turks in 1917. No sooner had they taken control than they issued “The Balfour Declaration” supporting “the establishment in Palestine of a national home for the Jewish people.” In 1918, Britain was joined in this endeavor by France, Italy and the United States.
On 5th Iyar 5680 (April 23, 1920), the heads of the Allied Powers who had won the First World War – led by Britain, France and Italy – met in San Remo for an international convention, the purpose of which was to re-organize the world after the war.
The convention adopted the Balfour Declaration and gave it international validity, “recognition of the historic right of the Jewish people to return to their ancient homeland.” Britain received the mandate over Eretz Yisrael, which meant taking responsibility for helping the Jewish people establish their national home in accordance with the Balfour Declaration.
The San Remo Conference also stated that the national home of the Jewish people would stretch over all of Eretz Yisrael on both sides of the Jordan River.* 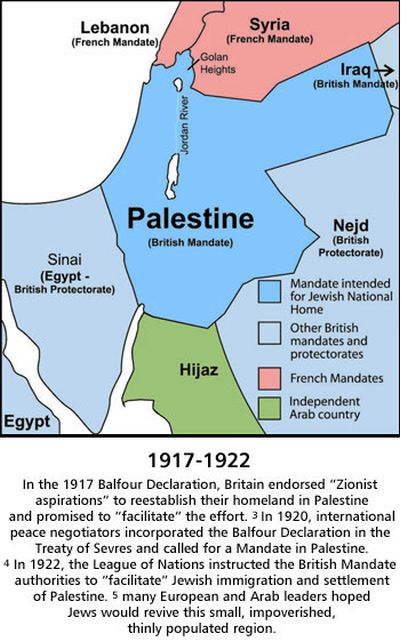