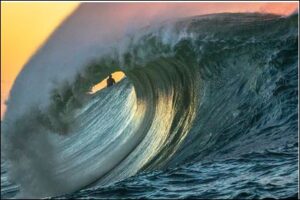 Excerpt from Chapter 1 of the Biblical book of Yona {Jonah} as translated by http://www.chabad.org/library/bible_cdo/aid/16183

1 And the word of the Lord came to Jonah son of Amittai, saying:

2 Arise, go to Nineveh, the great city, and proclaim against it, for their evil has come before Me.

5 And the sailors were frightened, and each one cried out to his god, and they cast the cargo that was in the ship into the sea to lighten it for them, and Jonah went down to the ship’s hold, lay down, and fell fast asleep.

6 And the captain approached him and said to him, “Why do you sleep? Get up, call out to your God, perhaps God will think about us, and we will not perish.”

7 And they said, each one to his fellow, “Come, let’s cast lots, so that we will know because of whom this evil has befallen us.” So they cast lots, and the lot fell upon Jonah.

8 And they said to him, “Tell us now, because of whom has this evil befallen us? What is your work and whence do you come? What is your land, and from what people are you?”

9 And he said to them, “I am a Hebrew, and I fear the Lord God of heaven, Who made the sea and the dry land.”

10 And the men were very frightened, and they said to him, “What is this that you have done?” For the men knew that he was fleeing from before the Lord, because he has told them.

11 And they said to him, “What shall we do with you, so that the sea subside from upon us, since the sea is becoming stormier?”

In contrast this is how the Climate Change Mccarthyists react when they see such odd weather in the USA
http://www.nationalreview.com/article/451301/climate-change-hurricane-harvey-democrats-politicize-issue
The two recent hurricanes have made it even worse. Call it Climate McCarthyism. The question, “Do you believe in climate change?” is the new, “Are you now or have you ever been a member of the Communist party?” Since Donald Trump’s election, climate activists, Democratic politicians, and the media have led a collective inquisition into administration officials, creating a blacklist of those who stray from the ideological groupthink on human-caused climate change.. These demagogues aim to make climate “denial” an offense that should prevent anyone from getting a job or receiving disaster relief. Even the Pope this week suggested political leaders who are climate deniers will face consequences.
EPA Administrator Scott Pruitt was repeatedly subjected to climate interrogations during his confirmation process. CIA Director Mike Pompeo was grilled about his views on climate change by Senator Kamala Harris (D., Calif.) during his confirmation hearing. Harris blamed climate change for rising instability in the world, and demanded to know where Pompeo stood on the issue. Two major hurricanes have emboldened the climate inquisitors. During a White House briefing Monday about Hurricane Irma, Homeland Security adviser Tom Bossert was asked by CNN’s Jim Acosta about the connection between climate change and national security. After Acosta falsely claimed that storms are more frequent and intense (no science supports this; the U.S. has just enjoyed twelve years without a major hurricane), he asked Bossert, “When you see three Category 4 hurricanes all on the same map at the same time, does the thought occur to you, ‘Jeez you know, maybe there is something to this climate change thing and its connection to powerful hurricanes?’” This is your average grade-school understanding of science.

Comment by Shlomo Moshe Scheinman: If you are new to these blogs read what I have been posting many times in the past 30 days explaining the theological cause for the disasters. And don’t think the problems of the USA are over. I expect more punishments.