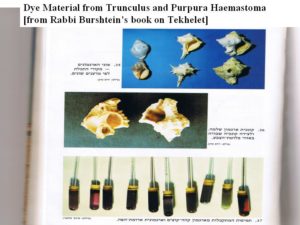 Quote from Baruch Sterman’s
The Rarest Blue: The Remarkable Story of an Ancient Color Lost to History and Rediscovered

Justinian I, one of the great emperors of the East, like Theodosius II collected imperial decrees preceding him. The Codex Justinianus, which appeared in 529, itself part of his Corpus Juris Civilis (Body of Civil Law), completely reworked and rewrote all of Roman law, shaping and influencing European law for many centuries.
Book 4.40 of the Codex begins:

No private citizen shall have the right to dye or sell purple cloth, either silk or wool, in the colors called blatta, oxyblatta, or hyacinthina. If anyone should sell the aforementioned dyed wool, let him know that he risks losing his property and his life.

Rabbi Meir Hellmann asserts in http://tekhelet.net/pdf/hellmann.pdf:
The word “hycinthina” used in this last edict is the exact same word used by the Septuagint and other Targumim to translate Tekhelet in the Torah. (I am assuming the slight difference in spelling between Baruch Sterman and Rabbi Hellmann is just a difference of what is the best transliteration into English of the foreign word.)

Jumping back to Baruch Sterman’s book, Sterman concludes this law forbidding the sale of “purple” cloth tells us that for legal purposes Tekhelet was considered purple {by the Roman Empire}, and therefore all the laws and interdictions about Tyrian purple-from Julius Caeser to Justinian, over more than five hundred years-also applied to Tekhelet.

What about the view of Chareidi Gadol, Rabbi Chaim Kanievsky, Shlita? see http://techeiles.org/debate.php

Rabbi Chaim Kanievsky Shlita has been asked by many about the status of Murex Techeiles. We have gathered here several of his responses. These responses seem to say that, in his opinion Techeiles cannot return until Moshiach arrives, but he felt that there is room for others to disagree. For those who feel this is the correct Techeiles, he has clearly ruled to them that they MUST wear it. http://techeiles.org/viewer.php?filename=debate%2F%D7%94%D7%A8%D7%91+%D7%97%D7%99%D7%99%D7%9D+%D7%A7%D7%A0%D7%99%D7%91%D7%A1%D7%A7%D7%99%2FHarav+Chaim+Kanievski+www.techeiles.org+.mp4

In a final note in https://vilnagaon.org/a-solution-to-fundamental-problems-regarding-tekhelet/ a slightly different transliteration of the Greek Word for Tekhelet is quoted:

Rabbi Aryeh Kaplan in his commentary to the Torah called The Living Torah, [edition of Jewish year 5745] on Exodus 24:4 deduced from the words of Raavia to Brachot 3b and from Mussaf HaArukh, Erech: Purpura – that the Chilazon had to be one of the types of Purpura Molluscs.
He established that the Septuagint’s translation of the Torah into Greek sometimes translates the word for Tekhelet as oloporphorus, which reveals in the opinion of Rabbi Kaplan that it was produced from a Purpura mollusc.
Rabbi Kaplan continues on by stating, that the Septuagint translation of the Bible translates the word for Argaman into Greek by the name porphura or porporeus.
Rabbi Kaplan established there also, that the word Porphura is not just the name of the dye in Greek but is also the name of the Purpura mollusc that is called in our days in English, by the name, Murex.
I also asked an expert on History and Greek, Professor Daniel Schwartz [a religious man] what is the definition of the phrase olo, which comes as a prefix to the word, porphorus, in the Septuagint’s translation for the word Tekhelet.
He responded that to be more precise the prefix is holo and not olo, and that the implication of this prefix, is- “entirely” -.That is to say, entirely from the porporeus dye.
According to his investigation of the word holoporphorus, which appears twice in the Septuagint, it appears, once as the translation of Tekhelet to Numbers 4:7 and once for Numbers 4:13 as the translation of the word Argaman. Usually, the word Tekhelet is translated to the word hawakinthos, which is the source for the modern English word, hyacinth which is blue-purple.
[Professor Shwartz also established that Josephus, the historian who lived at the end of the Second Temple period, used the word hawakinthos to describe the color blue or to describe some precious gem.]