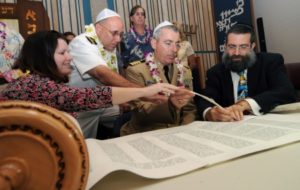 A widely—held answer is that Judaism is the way of life and thought of the Jews. But this leads to the downfall of any definition. Jews have, sad to say, been sinners as well as saints. They have upheld polytheism, pantheism and atheism, as well as monotheism. To-day they follow many of the ~isms with which modern man is blessed: nihilism, humanism,anarchism, Marxism, nationalism, Fascism, racialism, and even anti-Semitism. (Some of the latter group of Jews came to the sad conclusion of committing Suicide!)

This brings us to the only historical and logical means of defining Judaism: the way of life and thought expressed in the specific religious literature of the Jewish people. A study of these sources gives the following result:—

Judaism is the life—pattern based upon the Divinely-revealed Written and Oral Teaching (i.e. Torah) contained in the Pentateuch and Talmudical Tradition. This concept is the ’framework of reference’ and axiom of Judaism. Every science is bound by, and built upon, certain axioms, without which no proof, further analysis or investigation is possible. So is Judaism bound by, and built upon, this axiom of Torah Revelation.

The Five Books of Moses are of Divine origin and were recorded by Moses. This is apparent from the Pentateuch itself:—
’And the Lord said unto Moses, Write this for a memorial in the book’ (Exodus, 17 : 14);

’And Moses wrote all the words of the Lord’ (ibid. 24 : 4);
’And I will give thee the tables of stone, and the law and the commandment which I have written, that thou mayest teach them‘ (ibid. 12);
’And the Lord said unto Moses, Write these words, for in accordance with these words have I made a covenant with thee and with lsrael’ (ibid. 34 : 27);
’And Moses wrote their goings forth, stage by stage, by the commandment of the Lord’ (Numbers, 33 : 2);
’And Moses wrote this law’ (Deuteronomy, 3i : 9);
’And Moses wrote this song on that day’ (ibid. 22); and especially, ’Moses made an end of writing the words of this law (Torah) in a book, until they were finished’ (ibid, 24).
These, as well as many other passages (’The Lord spoke unto Moses saying’, ‘As the Lord commanded Moses’), show that the prophet Moses was the mediator who brought the word of God to Israel and wrote it down.

THE BIBLE
This principle permeates the other books of the Bible, which pre-suppose the existence of the Pentateuch as the highest revelation of God’s Will, referred to as the Torah of God and the Torah of Moses. The books of the Prophets, a lower grade of revelation, describe the history of lsrael in its relationship to God and His Law; and come to strengthen the understanding and observance of the Torah. They begin with God’s injunction to Joshua:’Only be thou strong and very courageous to observe to do according to all the law (Torah) which Moses My servant commanded thee: turn not from it to the right hand or to the left, that thou mayest have good success whithersoever thou goest. This book of the law (Torah) shall not depart out of thy mouth, but thou shalt meditate therein day and night, that thou mayest observe to do according to all that is written therein’ (Joshua,1 :7, 8). ’They end with the Divine message to Malachi: ’Remember ye the Torah of Moses My servant, which I commanded him in Horeb for all Israel’ (Malachi, 3 : 22).
The books of the third section of the Jewish Bible, known as the ’Writings’, were recorded by means of the Holy Spirit, which is below prophetic revelation. They begin by describing the happiness of the man whose ’delight is in the law (Torah) of the Lord, and in his law (Torah) doth he meditate day and night’ (Psalms 1 : 2). They end with an account of the religious revival introduced by King Josiah of Judah after a period of corruption and religious laxity: ’And the King stood in his place, and made a covenant before the Lord, to walk after the Lord, and to keep His commandments, and His testimonies, and His statutes, with all his heart and with all his soul, to perform the words of the covenant that were written in this book . . . the book of the law (Torah) of the Lord, given by Moses’ (II Chronicles, 34 : 3], 14).

POST-BIBLICAL PERIOD
The authenticity and Divine origin of the Torah were accepted by the authors of the Apocrypha, Pseudepigrapha and cognate literature; by Philo and the Hellenist writers. Nineteen hundred years ago, Josephus wrote:’How firmly we have given credit to those Books of our own nation is evident by what we do; for during so many ages as have already passed, no one has been so bold as either to add anything to them, or take anything from them, or to make any change in them. All Jews imbibe with their mothers’ milk the belief that these Books are of Divine origin, as well as the resolve to remain faithful to them, and willingly, if need be, to die for them. For it is no new thing for our captives, many of them in number, and frequently in time, to be seen to endure racks and deaths of all kinds upon the theatres, that they may not be obliged to say one word against our laws, and the records that contain them’ (Contra Apionem, 1 : 8). The Mishnah states that ‘he who says the Torah is not from Heaven (i.e. God) has no portion in the World to Come’ (Sanhedrin, 10 : 4). ’One who said: “I accept the whole Torah except for this word” is guilty of having despised the Ward of the Lord; and even if he said: “the whole Torah is from the Holy One, except for this word which Moses composed himself” ’ (Sifre on Numbers 15 : 31). The Talmud reiterates this view (Yerushalmi, Sanhedrin, 10 : 1; Bavli, ibid, 99; see Hebrew Supplement A).
All traditional Jewish Codifiers, Biblical and Talmudical commentators, scholars and philosophers up to our own time, have taken this as the foundation of Judaism. Maimonides wrote: ’The whole of this Torah which was handed down by Moses our Teacher is of Divine origin. This means that the whole of the Torah came to him from God in a manner which is metaphorically called “speaking”; but the real nature of this communication was known only to Moses, to whom it came . . . Every word of the Torah contains deep wisdom and wonderful truth for him to whom God hasgiven understanding. Its deepest wisdom is beyond the limits of the human mind. “It is larger in measure than the earth, and wider than the sea.” Man has but to follow in the footsteps of David, the anointed one of the God of Jacob, who prayed: “Open my eyes and I shall behold wonderful things from Thy Law” . . . When a person believes all this . . . he enters into the community of Israel . . . If he committed sins on account of material desire, or the overpowering force of his evil nature, he is punished according to his transgression, but he has a portion in the World to Come. But if a person’s belief in one of these fundamentals has become corrupted, he has thereby left the community of Israel, and has denied the major principle of faith. He is called a Sectarian, heretic (Epikoros), and one who cuts down the plantations (of our faith)’ (Commentary on Mishnah, Introduction to Sanhedrin, 10; see Hebrew Supplement C). Rabbi Joseph Albo in his book ’The Principles of Faith’, states: ’Every man of Israel is obliged to believe that everything that is mentioned in the Torah is completely true, and he who denies any matter that is written in the Torah is termed a heretic’ (Section 1, Ch. 2). The whole stream of Jewish thought is based upon this axiomatic assumption.

In more recent times, honest Jewish thinkers of all schools have recognised that the concept of Torah—revelation is the only basis for a definition of Judaism. This is apparent from the writings on this subject by, for example, Z. H. Chayes, S. R. Hirsch, M. Cahn and S. Kaatz. A discussion in the ’Monatschrift fuer Geschichte und Wissenschaft des Judenthums’ (1923—1927), which included liberal scholars, came to the same conclusion. The above concept is ‘The Root of the Jewish Religion’ (title of a brilliant essay on this topic by J. Wohlgemuth in Jeschurun, I928). Alternative attempts at a definition of Judaism have led to confusion and subjectivity.

Most of the sects and religions that have branched off from Judaism have also accepted this basic principle. The Samaritans who separated from the main body of the Jews at the beginning of the Second Temple period based their creed upon the Pentateuch which they regarded as of Divine origin. So did the Jewish Hellenists, the Essenes, the Qumran sect, the Sadducees, the Boethesians, the Karaites and most groups of reformed Judaism, until recent times. This was also assumed by the sacred writings of Christianity and Islam; and by the scholars and masses of humanity who adhered to these daughter-religions of Judaism. Today it is the belief of millions of people and thousands of Gentile scholars. That which divides these sects from authentic Judaism is their non-acceptance of Jewish Tradition.

The written text was preserved with meticulous care throughout history. Josephus wrote: ’In the course of many centuries no-one has dared to change, add to, or take away anything from, the text’. (Its reliability has recently been confirmed by the discovery of the Dead Sea Scrolls.) The Revelation also included the manner of reading and punctuating the text, which was orally transmitted. This was committed to writing very much later. Together with notes and traditions about the text, it became known as the ’Massorah’, which means ‘fetter’ or ’fixation’ of the text, or ’tradition’. (See Ezekiel, 20 : 37.)

The written Revelation (תורה שבכתב) was accompanied by the Oral Revelation (תורה שבעל פה). This incorporated, apart from the above, the exposition of the written laws, some independent oral transmissions (הלכות למשה מסיני), and rules of interpretation and application (מדות).

The Oral and Written Torah form an indissoluble unity. Shechitah, for example, is only hinted at in the text of the Pentateuch, in the words: ’Thou shalt kill of thy herd and of thy flock which the Lord hath given thee, as l have commanded thee’ (Deuteronomy 12 : 21). This commandment, otherwise not mentioned in the Pentateuch, was expounded in the Oral Revelation.

The Sages of Israel were commanded to accept, study and apply this Divine Code, which was later incorporated in the Mishnah and Talmud, to all spheres of life. ’Thou shalt observe to do according to all that they shall teach thee. According to the law which they shall teach thee, and according to the judgement which they shall tell thee, thou shalt do; thou sha t not turn aside from the sentence which they shall declare unto thee, to the right hand, nor to the left’ (ibid, 17 : 10, 11). The authority of the Rabbis lies in their acceptance and application of this Torah—Revelation. This grants them the right and the duty to decide doubtful issues and promulgate fresh laws in order to uphold the Torah, which they should apply to all eras and areas. (The fact that there are self-styled Rabbis who depart from this view, will surprise no-one who knows that there have been, and still are, Rabbis who deny the existence of God, and oppose Jewish Observances such as Milah, Kashruth and the Sabbath.)

To read the entire article http://www.dvar.org.il/index.php?option=com_content&view=article&id=623:revelation-torah-from-heaven-ben-levi&catid=32:newest&Itemid=214&lang=en