Rambam and Aliyah to the Temple Mount by Ariel Natan Pasko

Earlier in the week, the 20th of Tevet, marked the Yom Hillula (day of festivity) or Yahrtzeit, of the Rambam (Maimonides). He died in 1204. So, I thought it would be interesting to look at a major event in his life, that might have been missed by some, back at the end of October.

The Torah reading was Parshat Noah, the Hebrew date was the 6th of Cheshvan. It marked 855 years since the Rambam, made Aliyah (went up), to Har HaBayit (the Temple Mount), in the Old City of Jerusalem, and prayed…

Something the Israeli government officially forbids Jews to do today!

Jews that go up to the Temple Mount today, are warned by Israeli police, not to pray, yet they are still regularly harassed by Arabs and Wakf officials. The Wakf people commonly make a commotion and then get the Israeli police involved, who then often remove the Jews from the mount. For example, last month, a Jew youth was detained in a humiliating manner (Chillul HaShem – showing weakness in the eyes of the enemy – the Wakf), and removed from the Temple Mount, after he was found with tefillin in his pocket, according to Temple Mount activist Arnon Segal. 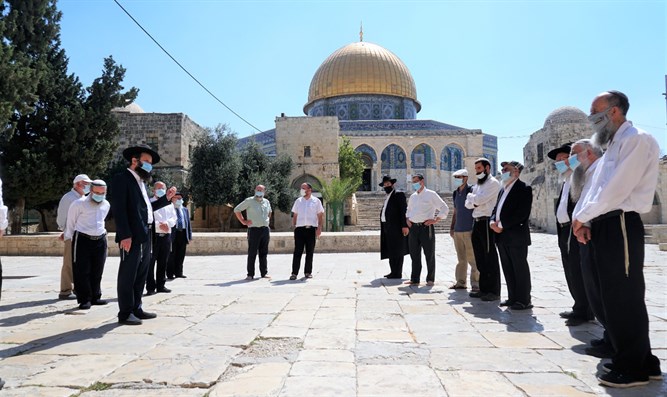 It’s not only the Wakf officials on the Temple Mount, but the Palestinian Authority’s Ministry of Waqf and Religious Affairs, who regularly work against Jewish rights on the mount. In a report issued by them, they alleged that there were more than 24 cases of “desecration of the al-Aqsa Mosque by Occupation forces and settlers,” during the month of December, 2020. They also claimed that Israeli security forces prevented the Muezzin (call for prayer) from being sounded in the Ibrahimi Mosque (Tomb of the Patriarchs in Hebron) from being heard 46 times.

But the Palestinians don’t just harass Jews. Recently, Abdul Rahman al-Lahim, a Saudi lawyer with a quarter of a million Twitter followers, called “to free the Al-Aqsa Mosque from the Palestinian brats,” in a post on his Twitter account. He Tweeted, after Palestinian Arabs cursed other Arab visitors to the Temple Mount from Arab states, which had recently signed normalization agreements with Israel. “It is very important that the Emirates, Bahrain and Israel seek, after the peace agreements, to find a tool to liberate the Al-Aqsa Mosque from the Palestinian brats, in a way that will ensure that visitors to Al-Aqsa are protected from Palestinian bullying,” he wrote. He called the PA control of the Temple Mount, “the rape of Al Aqsa.”

On the 6th of Cheshvan, in the Hebrew year 4926, 1165 CE, the Rambam made Aliyat HaRegal (pilgrimage) to Har HaBayit, visiting other areas around Jerusalem and Hebron as well.

The event was so special to the Rambam, that he vowed to make it a personal holiday and commemorate it annually.

Jews still commemorate it till today… Ascending the Temple Mount on Rambam Day, 5780

The Rambam, wasn’t just another radical, right-wing political rabbi. But one of the greatest rabbis of all time, both in Halacha (Jewish law), and Jewish thought. His most well known work, is the 14 volume Mishneh Torah, (literally, The Repetition of the Torah), which was the first comprehensive, systematic codification of the entire Halacha, including, Hilchot Beit HaBechira (the Laws of the Temple – the Rambam assumed Jews would rebuild it). His work became the basis for later codifications, most notably, the Shulchan Aruch, written by Rabbi Yosef Karo in the 16th century. Yet, the Shulchan Aruch didn’t even cover all the areas of Jewish law that the Mishneh Torah did.

The Rambam in describing his pilgrimage to Israel said:

“We left Akko (the port city of Acre), for Jerusalem under perilous conditions. I entered into ‘the great and holy house’ and prayed there on the sixth day of the month of Cheshvan. And on the first day of the week, the ninth day of the month of Cheshvan, I left Jerusalem for Hebron to kiss the graves of my forefathers in the Cave of Machpela. And on that very day, I stood in the Cave and I prayed, praised be God for everything. And these two days, the sixth [when he prayed on the Temple Mount in Jerusalem] and the ninth of Cheshvan, I vowed to make as a special holiday, in which, I will rejoice with prayer, food and drink. May the Lord help me to keep my vows….” (translation, courtesy of the Temple Institute).

What was this “Great and Holy House” the Rambam talks about?

Either way, it’s clear he prayed on the Temple Mount and at the Cave of Machpela in Hebron. Something that Jews are still struggling with, to do, today.

For those that risk watching youtube, here is a Youtube Video Link About This Subject provided by Ariel Pasko

Vilnagaon.org presents many viewpoints both for and against ascending the Temple Mount. Mistakes about this issue could be spiritually dangerous. Please must research this issue in a thorough fashion. In the past a sufficient number of people made mistakes, to the point where some prominent rabbis (that reject the right-wing viewpoint, “he that controls the Mount controls the land”) wanted to ban the entire Temple Mount, under all circumstances with no exceptions.