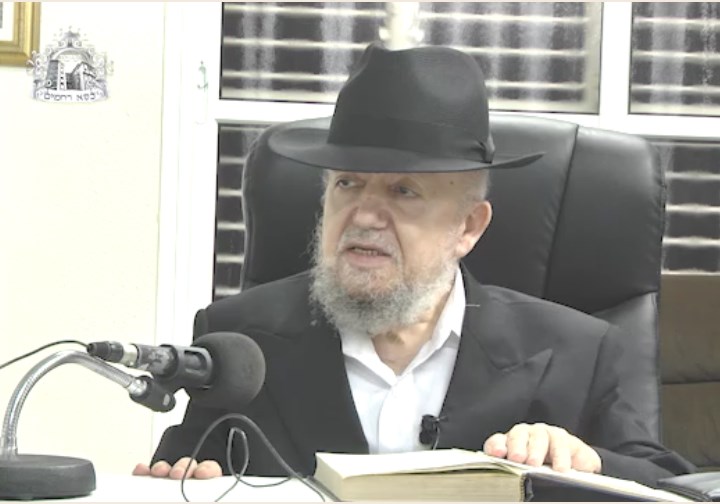 Translation provided by www.israelnationalnews.com/News/News.aspx/229932 A video of the original Hebrew sermon is found at https://vimeo.com/277868353
During his weekly class Saturday evening, the head of Yeshivat Kashei Rachamim, Rabbi Meir Mazuz, explained that the Reform who demand a foothold at the Western Wall are disappearing due to assimilation in the United States and of the need to fight for the cancellation of the Western Wall Plan.

“After they failed in Germany, after they had destroyed Judaism in Berlin and led thousands astray, the Reformers went to America. But they say they have no future, why? The next generation is marrying gentiles and they are encouraging it, they officiate at the wedding – a rabbi on this side and a priest on the other. I read that not a moment passes in the world when a Jew does not abandon Judaism; thousands and tens of thousands are being lost.
“Afterwards, what happens? The son of a gentile mother is a gentile, even though he is your offspring. So what did they do? They came here and seek to dig their claws into the Western Wall like the pig did to the walls of Jerusalem.”

Rabbi Mazuz scorned the possibility that the Reformists would gain a foothold at the Western Wall. “They want to divide the Wall; now there will be a place for Hasidim, a place for the Lithuanians, a place for Sephardim, and a place for them, but they are not Jews. They are against the Torah, against Judaism; everything is permitted in their eyes. There was once a secular Knesset Member – it’s brought in the book of Rav Tzuriel Bubleil – he came abroad from Israel and did not know where to spend Yom Kippur. He entered a Reform Temple, the rabbi arrived, played the Kol Nidrei, and afterwards said to them, ‘Gentlemen, there’s a restaurant here; go eat.’ That’s Judaism? Cars, food…what is this insanity? It’s an imposter of Judaism.”

He said that the haredi and religious representatives in the Knesset should fight for the cancellation of the Western Wall Plan. “The religious ministers must insist on this, fight for it, to make known that if they do not agree to this, the government will fall. Do not think ‘if the government falls, what will become of us?’ Don’t worry – when one battles for the truth, the truth always wins.

“In the beginning, they played with the Sabbath, then with the Western Wall, with the mikvahs, with all kinds of games, but there is no such thing! A person must give of himself, and then the Holy One helps. Even in our generation there are miracles and there will be miracles. If we stand strong on this, nothing bad will happen. When one stands on a principle, there is Divine help, only we are irresolute.”

The first force of the Reform movement in Israel is “Rabbis for Human Rights”. Boaz Golan reports:
There are 54 Reform communities in Israel (more than 15,000 Orthodox synagogues in Israel), a third of which are led by Rabbis for Human Rights. The CEO of the organization is Arik Ascherman, you guessed it, Reform. The chairman is Mr. Moshe Yehudai, Bingo! He too is Reform. Of the 16 members of the board, 9 define themselves as Reform. In short, it can be said that the meeting of their management brings together the entire Reform community in Israel, in one room.

Thus, here is a partial list of the “human rights” for which the rabbis struggle, namely, the Reform Movement: accusing the IDF of war crimes in Operation Cast Lead, providing information to the Goldstone Report, lobbying to help the boycott of Israel, funding the TA’AYUSH organization (A pro-Palestinian organization at the expense of Jewish lives) , accusing Israel of violating international law in Operation Protective Edge, a campaign against Israel in the matter of the Bedouins, in short, in favor of human rights, against the State of Israel.

More on the left wing credentials of the Israeli “Reform” Movement

Uri Regev, one of the leading “rabbis”, is also the director of Hadash, which is funded by the New Israel Fund. Idit Lev, one of the leaders of the demonstration at the Western Wall, is also a Reform rabbi who will serve as chairman of the Council of Progressive Rabbis, as you must have understood.

The second force of the Reform movement in Israel is the Reform Center. It is headed by Mrs. Anat Hoffman, one of the leaders of the Women of the Wall. What is the center doing with the exception of harassing women who pray at the Western Wall? So, along with five other de-legitimization organizations from the NIF and BDS organizations, they petitioned the High Court of Justice against the repeal of the Boycott Law, so you heard correctly, the Reform movement is openly working to boycott Israel.

Anat Hoffman has time, and therefore parallel to the Reform Center, the struggle for the Wall and the creation of a boycott of Israel. She is also a member of the Hotline for Refugees and Immigrants, alongside her, serving no other than Naomi Chazan.
Wikipedia also informs us that “prior to the 1993 Oslo Accords, Hoffman was the chairwoman of Women in Black, an international women’s anti-war movement with an estimated 10,000 activists around the world. The first group was formed by Israeli women in Jerusalem in 1988, following the outbreak of the First intifada”.

Hoffman’s assistant in the Reform Center, Batia Klaus, is apparently a little less talented, and is therefore a member only of the Moriah Foundation, which assists in the transfer of budgets to Adalah, Ir Amim, Yesh Din and others. Ahh, and she is also active in the Machsom (Checkpoint) “Watch” organization .
To quote from https://www.ngo-monitor.org/reports/machsom_watch_political_agenda_in_the_name_of_human_rights/

The Israel-based Machsom Watch monitors and disseminates reports on Israeli soldiers at checkpoints, with the ultimate aim of “ending the occupation.” Machsom Watch publications regularly omit the context of terror and employ human rights terminology, “apartheid” rhetoric and emotive and politically charged language that contribute to the demonization of Israel. In many cases, their allegations are either inaccurate or unverifiable. Machsom Watch is funded by private donors, the New Israel Fund and the EU.

Machsom Watch (also known as “Checkpoint Watch” / “Women’s Fund for Human Rights” / “Women for Human Rights” / “Women Against the Occupation” / “Women of the Checkpoints”) was established in January 2001 “in response to repeated reports in the press about human rights abuses of Palestinians crossing army and border police checkpoints”. Its stated goals are “to monitor the behavior of soldiers and police at checkpoints; to ensure that the human and civil rights of Palestinians attempting to enter Israel are protected; to record and report the results of our observations to the widest possible audience, from the decision-making level to that of the general public.” On the New Israel Fund website, Machsom Watch claims another main goal of “end[ing] the Occupation.”

This project has the potential to promote good practice at checkpoints, and increase awareness of the complexities of balancing Palestinian rights to dignity and freedom of movement, with Israeli rights to life and security. However, Machsom Watch’s strong political agenda and its distorted approach to and portrayal of events at the checkpoints, undermine its credibility, and reveal its core anti-Israel ideology.

Comment #2 Does the Reform Movement actually want to pray at the Kotel?

A person arriving this morning, Tuesday, for 17th of Tammuz prayers at the Western Wall’s “Ezrat Yisrael,” the agreed-upon mixed gender area, discovered that the space was completely empty.

In a video uploaded by the worshiper, he wonders why the Reform and Conservative movements are fighting to receive an additional space and mutual entrance at the Western Wall when they don’t even bother to show up at the Western Wall on the day that the walls of the Old City were breached.

“Today is the 17th of Tammuz, the day the walls of Jerusalem were breached before the destruction of the Temple, a most significant day for the nation of Israel, on which we pray and express sorrow at the destruction of the Temple, and look at this area – completely empty. Where are our Reform and Conservative brothers who asked the Supreme Court for an egalitarian prayer space? Here, you have a place to pray. Where are you?” he asked.

“The question has to be asked: Whether you really wanted a place to pray, or if it’s all just hypocrisy? I had to come here, so that this area would have at least a few prayers going up to Heaven. Because as far as you’re concerned, it’s all politics.”

Rabbi Benjamin of Tudella visited the Temple Mount Area around the time that Rambam did. His definition of the “Western Wall” does not match the popular modern definition.