Excerpt from Is Rambam For or Against Jews Participating in the Iftar Feast at the Home of Salim Jabbar, Head of the Abu Ghosh Council. A prominent rabbi tried to defend the participation of Jews in the Iftar Religious feast of Gentiles by the stating that Rambam holds, the religion of Salim Jabbar is not idolatry.

My counterclaim is that even Rambam would forbid the participation of ordinary Jews and all the more so Rabbis at Salim Jabbar’s Iftar feast.

A Picture and translated quote from the Srugim web site 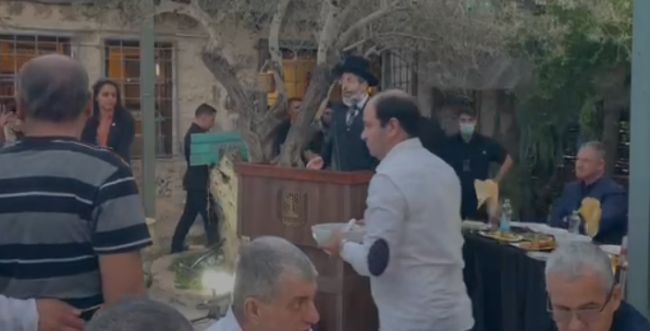 Among the latter Rabbis there is a dispute, did Rambam really believe that the Muslims do not sin on the issue of idol worship or perhaps from the precedent of Ulla, Nedarim 22a, Rambam expressed an opinion on the matter that has a double meaning.

Even according to the interpretation that Rambam really meant to exempt the Muslims from violation of the idolatry laws, this is not sufficient justification to allow the participation in the Iftar Feasts celebrated by Muslims.

In that post I brought Rambam’s Teshuva 449 to show, one must not attend, heretical fake holiday celebrations.

Here is a quote to back up that idea from Rambam’s son Rabbi Avraham.

An English summary of what he said, is that the prohibition of going in the statutes of the Gentiles, applies to those practices that don’t have a foundation in our belief system and early practices; and even when those Gentiles do not serve idolatry, we still have to abstain from these practices in order to prevent us from believing in their religious doctrines or to avoid stumbling in what the Torah warned us against, “Do not add to it” (Deuteronomy 13:1) and Shlomo (Solomon) said “Do not add to His words, Lest He indict you and you be proved a liar” (Proverbs 30:6). So too, what the Karaites and those similar to them, originated, one should abstain from – not to imitate the heretics.

It is beyond the scope of this article to determine if the above prohibition according to Rabbi Avraham son of Rambam, also applies to Non-religious practices of the Gentiles.

New Addition: In Response #448 In Teshuvot Harambam. Rambam informs R’ Ovadiah the convert, why he disagrees with the viewpoint that Yishmaelites are guilty of Peor, Cemosh, and Markolis worship at Mecca (some pronounce it Makkah). But he adds that although idolatry has been cut off from the mouths of those Yishmaelites, their mistake  and their stupidity is in other things which cannot be put into writing because of the rebels and wicked of Israel.