Rabbi Avraham Yitzchak Kook former Chief Rabbi of British Mandate Palestine, in theory supported Jews participating in Sports (Orot section 34). He thought it would develop the materialistic side of the nation of Israel and he considered the development of the materialistic side within limits to be good for the nation and under certain circumstances would even improve the spiritual side of the very righteous. Rabbi Kook cites as an example, how the military prowess of Yoav (Joab) enabled David to devote more time  and energy to spiritual endeavors.

According to Rabbi Kook Avner was punished for using the sports competition as a pretext for spilling Jewish blood. However, had the youths competed simply to strengthen their power and spirit for the purpose of improving national strength, Rabbi Kook believed this would have had real spiritual value.

As a side point, I wish to comment about Rabbi Kook’s connection between the military capabilities of Yoav (Joab) with the spirituality of David.

The military prowess of Yoav (Joab) was not always for the benefit of David. When David was personally leading his troops, he came in contact with Avigail (Abigail) who convinced David he did not yet have sufficient authority to execute her husband for rebellion even though David had been anointed to be King by the prophet (see I Samuel chapter 25:23, Talmud tractate Megilla 14b) .

Had Yoav led the troops, it is not clear if Avigail (Abigail) would have been able to convince Yoav. Similarly, the whole Bat-Sheva incident occurred when David remained in his palace while Yoav was fighting the war against Amon. Had David led the battle, he would not have had the opportunity during the war to sin. See also Menachem Gottlieb’s video, “Refusing Orders” which discusses the complicated relationship between David and Yoav.

In any case I do not know if even Rabbi Kook supported participation of Jews in sports events, such as, the Olympics which involves finding solutions for several difficult halachic issues.

The Average Secular Israeli and Even Some Jews who define themselves as Religious, Regardless of What Rabbi Kook Has to Say, Believe that an Israeli Winning an Olympic Gold Medal Is Good for the Country

It turned out however, to be a win for him, but a loss for the Jewish state.

A Platform for Intermarriage

Since many Israelis feel proud that someone from their country won a gold medal in the Olympics it encourages them to further blur the lines between real Jews and Gentiles. In addition it appears that Artem is using his new fame to lobby for Civil Marriages in Israel, which will make it easier for Non-Jews to marry Jews which contradicts a Biblical prohibition (Dvarim/Deuteronomy 7:3).

Artem Dolgopyat Made a Strategic Decision to Become an Israeli Citizen Under the Law of Return In Order to Make it Easier to Earn a Gold Medal.

Dolgopyat’s mother said the move to Israel was the right thing to do, explaining that the family moved to Israel in order to help their son pursue his career as a gymnast.

“We needed to choose either to take him to learn in Kiev, or to come to Israel, so we chose Israel, and we chose correctly”.

The Israeli government immigration policies in the last few decades like other Secular-Zionist policies has actually led to the diminishing the Jewish Majority in the land. The definition of Jew by the Israeli government is based on Hitler’s definition of Jews as opposed to the traditional definition by Torah observant Judaism (“Orthodox”). The end result is that according to JOE MILLIS, JEWISH NEWS | PUBLISHED JAN 3, 2019

“Most of the immigrants to Israel last year were not halachically Jewish, according to figures released this week by the country’s Central Bureau of Statistics.

Under Israel’s Law of Return, anyone with just one Jewish grandparent is entitled to citizenship and of the 30,300 olim last year, 12,600 were Jewish and 17,700 were not.

This policy is not just bad for pragmatic considerations. It is also a direct violation of a Torah commandment as spelled out by Chazon Ish on Shviit, siman 24.

In the Latest Elections, the Jewish-Majority voted for forming a Center-Right Wing government. However, a left-of-center coalition came to power in the Jewish state, due to the vote of large Non-Jewish minorities.

True, other factors were also responsible for the loss by the Center-Right. But I am focusing on one problem at a time.

If Israel Remains A Democracy What’s So Bad That Jews Lose Absolute Control or Even Total Control Over the Land of Israel?

1 As the Jews lose more and more absolute control over the government of Israel, the influence of Judaism and the Bible in general weakens regarding the policy choices of society. In addition Jews that started out with a weak commitment to Judaism are seduced into leaving their heritage entirely.

2 As the Jews lose more and more absolute control over the government of Israel, they violate to a greater degree the Biblical Command in Dvarim / Deuteronomy 17:15 (translation by Rabbi Aryeh Kaplan) “You must then appoint the king whom God your Lord shall choose. You must appoint a king from among your brethren; you may not appoint a foreigner who is not one of your brethren”.

3 There were many democracies during the time of the Holocaust that did not lift a finger to save the Jews. Democracy is not enough to save the Jews in times of trouble. Even during our days, we already see left-wing parties in many Democratic countries that prefer to aid Anti-Semites at the expense of the safety of Jews. In other countries, right-wing Anti-Semites have used their hate policies for election success.

A Jewish state run by Jews is an insurance policy against a new Holocaust, Heaven Forbid!

True, it is a flawed insurance policy, which does not save everyone; that is to say, some Jews are killed despite the existence of a Jewish state (for all types of reasons, religious motivations, and ideologies); however, having some type of Jewish state overall is certainly better than no Jewish state existing.

Let us not forget that the Hamas party (that runs Gaza), which is dedicated to the extermination of all Jews in Israel, came to power in a democratic election. Besides launching thousands of missiles against Israeli Jews, they hate Jews so much, they are willing to blow themselves up on buses, if they can gain more victims by this method. 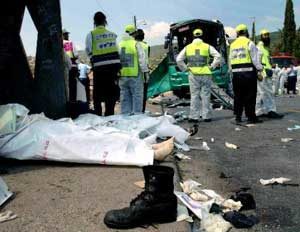 Conclusion. Don’t be fooled into believing that Democracy is a more effective method in protecting Jews than having a Jewish State.