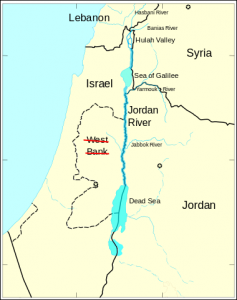 For the sake of ease, I will use the Sefaria.org translation of Part of II Kings Chapter 5 to remind my readers of details of the story concerning the Prophet Elisha and Naaman.

1) Naaman, commander of the army of the king of Aram, was important to his lord and high in his favor, for through him the LORD had granted victory to Aram. But the man, though a great warrior, was a leper.
2) Once, when the Arameans were out raiding, they carried off a young girl from the land of Israel, and she became an attendant to Naaman’s wife.
3) She said to her mistress, “I wish Master could come before the prophet in Samaria; he would cure him of his leprosy.”
4) [Naaman] went and told his lord just what the girl from the land of Israel had said.
5) And the king of Aram said, “Go to the king of Israel, and I will send along a letter.” He set out, taking with him ten talents of silver, six thousand shekels of gold, and ten changes of clothing.
6) He brought the letter to the king of Israel. It read: “Now, when this letter reaches you, know that I have sent my courtier Naaman to you, that you may cure him of his leprosy.”
7) When the king of Israel read the letter, he rent his clothes and cried, “Am I God, to deal death or give life, that this fellow writes to me to cure a man of leprosy? Just see for yourselves that he is seeking a pretext against me!”
8) When Elisha, the man of God, heard that the king of Israel had rent his clothes, he sent a message to the king: “Why have you rent your clothes? Let him come to me, and he will learn that there is a prophet in Israel.”
9) So Naaman came with his horses and chariots and halted at the door of Elisha’s house.
10) Elisha sent a messenger to say to him, “Go and bathe seven times in the Jordan, and your flesh shall be restored and you shall be clean.”
11) But Naaman was angered and walked away. “I thought,” he said, “he would surely come out to me, and would stand and invoke the LORD his God by name, and would wave his hand toward the spot, and cure the affected part.
12) Are not the Amanah and the Pharpar, the rivers of Damascus, better than all the waters of Israel? I could bathe in them and be clean!” And he stalked off in a rage.
13) But his servants came forward and spoke to him. “Sir,” they said, “if the prophet told you to do something difficult, would you not do it? How much more when he has only said to you, ‘Bathe and be clean.’”
14) So he went down and immersed himself in the Jordan seven times, as the man of God had bidden; and his flesh became like a little boy’s, and he was clean.
15) Returning with his entire retinue to the man of God, he stood before him and exclaimed, “Now I know that there is no God in the whole world except in Israel! So please accept a gift from your servant.”
16) But he replied, “As the LORD lives, whom I serve, I will not accept anything.” He pressed him to accept, but he refused.

The plague that Naaman had was loosely translated by Sefaria as Leprosy, but the name used for the plague in Hebrew is צרעת pronounced Tzaraat. That is to say the same plague mentioned in Vayikra / Leviticus chapter 13:9.

These 3 verses as translated by Sefaria.org are:

For an explanation, why the shape of the letters changed see Ktav Ivri – Ktav Ashuri – Did the Shape of the Hebrew Letters Change During the Time of Ezra?

The Nune Biblical Code Mentioned by the Rosh

Rabbi Asher ben Jechiel was born ca. 1250 in Germany, and died in 1327 in Toledo, Spain. Rosh studied in the yeshivot of the Franco – German Tosafist school, and his outstanding teacher was Rabbi Meir ben Baruch of Rothenburg. Due to persecution of the Jews by the Germans, Rosh fled to Spain in 1303, where he was greatly honored by Rashba. Later, Rosh became the rabbi of Toledo. After Rashba’s death, Rosh was accepted as the foremost halachic authority of his generation. Rosh’s literary legacy includes more than 1, 000 responsa, as well as commentaries on the Talmud in which he combines the Tosafists method of the Franco – German with that of the Spanish yeshivot. His son, Rabbi Jacob ben Asher, the author of the Tur, a noted halachic code, cites Rosh’s halachic decisions extensively. Likewise, R. Joseph Caro’s halachic code, the Shulchan Aruch, is replete with rulings of Rosh. The Tosafot haRosh to the Talmud has been added to the Project based upon the R. Shraga haCohen Vilman edition, republished in Brooklyn, N. Y., 1996. This edition includes the Rosh’s commentary on Seder Zeraim, which was also included in the Responsa Project. The Responsa Project also includes the Rosh’s commentary on the Mishna, Seder Taharot, as printed together with Maseceht Nida in the Vilna Shas. Piskei Ha – Rosh was first printed in the Venice edition of the Talmud Bavli in 1520. Piskei Ha – Rosh summarizes the most important halachic points of each talmudic discussion, much like the Rif, although it frequently quotes the Tosafists’ explanations of the Talmud and their halachic decisions. A condensed version of Piskei Ha – Rosh is printed at the end of each tractate. This work seems to be the work of Rosh’s son, R. Yaakov Ba’al Ha – Turim. Haggahot Asheri, which contains halachic decisions from various Ashkenazic authorities (the Tosafists, Or Zarua, R. Hezekiah of Magdeburg, and others), was printed together with Piskei Ha – Rosh in the first edition of that work. These glosses were edited by R. Israel of Krems (Austria, fourteenth century), the great – grandfather of R. Yisrael Isserlein, author of the Terumat Ha – Deshen. Haggahot Asheri appear on most tractates and substantially influenced later halachic decisions. Orchot Chaim, a short mussar work also attributed to the Rosh, was first printed in Fano in 1503, and was subsequently reprinted many times, often with commentaries. In its present form, this work lists some 200 religious practices, and is divided into four parts. There is some doubt as to the actual authorship of the work, as parts of it are certainly not by the Rosh. Rosh authored a commentary to the Torah which was published in Hadar Zekenim to the Torah with commentaries by the Tosafists on the Torah and Rashi (Leghorn, 1840).