Skip to Main Content
One first has to investigate if there is a prohibition to the Yishmaelites in their belief system according to our Torah.
Then we will explain if there is a distinction between the Yishmaelites and the other nations as far as their houses of nonsense (worship) and their “saints” (Kdeishim).

Behold in the matter of their faith it appears there is in it, an aspect of idolatry and one who believes in it, is like a believer in idolatry for behold they say that Hashem, may he be blessed, made “him” (that well known Yishmaelite) great and gave him dominion and gave him permission to put someone into the Garden of Eden or to Gehenom and to take out from there and all that sin but recount his name, will receive atonement. And even the prophets do not have permission to enter the Garden of Eden unless they call in his name and even the master of all prophets could not enter into the Garden of Eden until he called in his name.
And also regarding these “saints “(Kdeishim) they believe Hashem may he be Blessed, gave power in their hand to do good or bad, and they redeem and save from troubles and punish those who swear in their names falsely or to those who treat them with light headedness or in a similar fashion; and someone whose friend provoked him, they bring an offering to the “saint” from wax or olive oil or slaughter by him oxen and similar things in order that the “saint” will avenge him; furthermore, they say that they travel a number of days travel in one moment and they are as angels and this is just a bit of their ways and sayings and there is no need to elaborate.
Now from all of this, the matter is obvious that one that practices this and believes in it, is as one who believes in foreign worship (idolatry) and this is the service of the generation of Enosh and their manners as described by Rambam in chapter 1 of Hilchot Avoda Zara that even one who believes that there is an intermediary between man and the Omnipresent is as someone who believes in foreign worship (idolatry) and all the more so to believe that the Holy One Blessed be He, gave dominion to any created being, to bring in or take out, to give reward or to punish and similar matters to this, for this is a matter that was made forbidden by the Torah and commanded concerning it the restrictions of foreign worship (idolatry) {end of quote}.

The original Hebrew source for this rabbi’s ruling is found at https://forum.otzar.org/viewtopic.php?t=10435 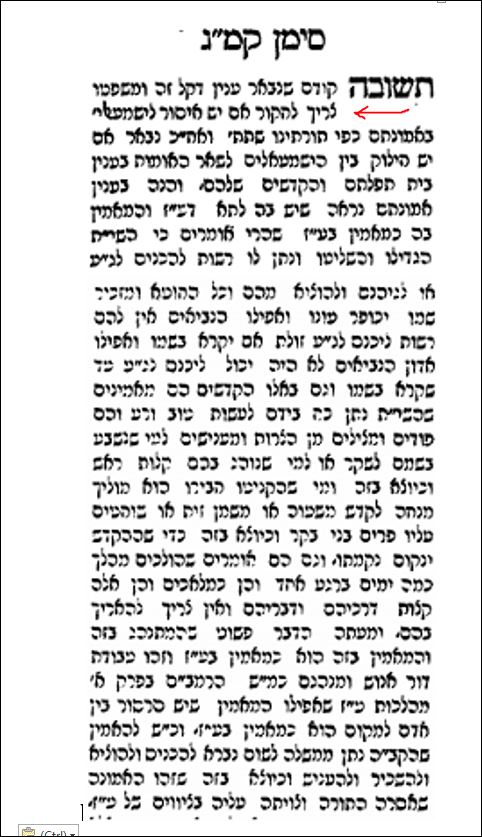 Appendix 1: Rabbi Moshe Feinstein was under the impression that at least some sects of the Yishmaelite religion were not guilty of Foreign Worship (Idolatry)

See Igrote Moshe Yoreh Deah 2:7 where it appears that Rabbi Moshe Feinstein was under the impression that some sects of the Yishmaelite religion were not guilty of Foreign Worship (Idolatry). However, see that same source for an explanation why he believed even those sects are seriously violating the religious obligations that are incumbent upon Gentiles.

Appendix 2: Chut Hameshulash by one of the Rosh Yeshivas of Volozhin

See Chut Hameshulash, Vol 3, Siman #28, where if you read what the author says word for word, instead of relying on third parties, you will see that he says, that the Yishmaelite sect that he dealt with was guilty of foreign worship of the moon. Because the author of Chut Hameshulash found a loophole in halacha regarding their house of worship, people who have not read Chut Hameshulash mistakenly believe, he exempted that sect from idolatry. The truth is, he did not.

Regarding the loophole used by Chut Hameshulash concerning their house of worship, for those who read Hebrew see https://60ribo.org.il/moon/ for reasons to avoid using the suggested loophole.

Appendix 3: The Chafetz Chaim on Self-Sacrifice to Avoid the Sin of Idolatry

As part of positive commandment #5 of Sefer Hamitzvot Hakatzar, the Chafetz Chaim rules:
But in regards to Foreign worship (idolatry), forbidden intimate relations classified as “Giluy Arayot”, and bloodshed – even in private and even when there is no anti-religious decree against Judaism and even when the person who is compelling intends only for his personal pleasure and not to make him change his religion, nevertheless one should be killed and not transgress.
Comment: Here the Chafetz Chaim is stating the general principle without spelling out the nuances, of what does or does not fall into the category of these 3 severe sins.

Appendix 4: The Dispute Between Rambam (Maimonides) and Most Rabbis of His Stature – Regarding An Act of Worship of Idolatry out of Fear

What Happens If Someone Because of Fear Makes the Wrong Choice and Does Do an Act of Idolatry.

Translation of Rambam (Maimonides) Hilchot Avoda Zara 3:6 with the critical comments of Raavad

One who worships idolatry out of love, for instance, he coveted a given image because it was made superbly beautiful, or he worshiped it out of fear lest it perpetrate harm against him, as its devotees imagine that it can do good and evil, if he accepted it as a god he is guilty of an offense punishable by stoning; and if he worshiped it after its mode or worship, or with one of the four kinds of worship either because of love {for art} or because of fear {of harm from the idol}, he is exempt {from the usual punishment for idolatry for intentional violation or sin offering for mistaken violation}…

Raavad comments: And in the Gemara the concepts, “out of love” and “out of fear” go together, and we explain this to mean out of love of man or fear of man and not {as Rambam contends} out of love of the idol.

More About One Who Performs an act of idolatry out of fear – A discussion of the viewpoints of the Rishonim. The following is a translated quote from the book Metivta, Yalkut Beurim on Sanhedrin 61

The Ran (an abbreviation for Rabbeinu Nissim) was astonished regarding, Rambam’s view, for later on (Sanhedrin 65a) they said, that someone who offers incense to a demon, namely, he offers incense before it in order that it will do good for him, this is considered an act of idolatry; even if that person has in mind in this service, that the demon does good for him without accepting him as a deity, is nevertheless guilty of foreign worship; and “the Ran” concludes that it appears to him that all that do an act of worship to any form, in order to get some benefit, behold that person is giving Divinity and Dominion to this thing over this matter and therefore is worshiping it and it is a matter of idolatry.

So too, in footnote 24, there, “and so too Meiri was astonished (see the words HaOved) and see in Rivash (Responsa, siman 110) that wrote that the latter rabbis, have agreed that Rambam’s opinion (Maimonides) is not correct and therefore he explained (the Gemara) in accordance to the opinion of Ramban (Nachmanides) that the fear is from a Gentile, that he will not harm him.
And in Be’er Mayim Chaim commentary (starting with the word Itmar) he proposes a solution to answer the question on Rambam… (see there).