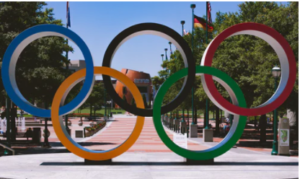 The Hebrew web site Srugim reports that the head of the Religious Zionism party (in Israel’s legislature), Betzalel Smotrich stated:

“Happy with Linoy’s gold, sad about the desecration of Shabbat (by Linoy), happy that the Prime Minister and the President waited for Shabbat to come out with the blessings, sad that Netanyahu issued a message in the middle of Shabbat, happy that more and more Jews are keeping Shabbat, sad that there are those here who take advantage of the medal to laugh at Shabbat and its observers. Glad that as throughout history Shabbat and its keepers will win. Have a good week!”

The chairman of Torah Judaism party, MK Moshe Gafni, called Netanyahu by the title Mr. and not by the title MK. In his statement of condemnation MK Gafni asserted:

The Olympic Games are not a matter of saving lives; the opposition leader is a state official, and a statement should not have been issued with the desecration of Shabbat. I am glad the President and Prime Minister waited until the end of Shabbat; this is how Mr. Netanyahu should have behaved.

Opposition leader Netanyahu’s statement in the midst of Shabbat Kodesh insulted masses of Shabbat observant Jews, hurting his loyal partners that Shabbat Kodesh (the Holy Sabbath) was very dear to their hearts. Mr. Netanyahu, Sabbath is unable to waive its honor. “

Netanyahu’s Likud party apologized, claiming it was a technical error that caused Netanyahu to violate the Sabbath.

As background to this article see Electricity on Shabbat. For someone who knows nothing about Shabbat it is best to ask a Sabbath observant Jew, since the article that I referred does not cover all the various details and might leave the wrong impression of what you can do or not do on Shabbat.

One final point, I am surprised that MK Smotrich did not bring up some of the other halachic prohibitions that Linoy violated to get the medal.

“I don’t see any problem with congratulating sports competitors on Shabbat,” Steinitz said in an interview on Radio 103 FM. “Anyone who isn’t religious or haredi travels on Shabbat and talks on the phone on Shabbat. To my mind, this is simply being excessively sensitive and all the fuss being made is out of place.”

1 When the prophets of Israel in the Tanach (Bible) protested bad behavior they didn’t limit their criticism to religious sinners. They also criticized Non-Religious sinners. Here MK Smotrich, MK Gafni, and MK Deri are following the prophetic tradition.

2 The new Center-left government in Israel, together with the Judicial Activist Courts and the selective enforcement of Laws by Police, etc. are depriving Religious Jews of employment, educational opportunities, cutting the budgets of yeshivas, and brainwashing religious Jews, who are drafted into the army into accepting so-called “Israeli values”, etc.

A Likud secularist like Steinitz who needs the support of religious Jews to advance ideas that he believes are important, should be sensitive to the suffering of the religious who feel damaged and threatened by the trends of Israeli society.

Addition 2 According to Janglo.net Netanyahu Apologized After Hearing the Criticism