As a proof that G-d does not endorse “Land for Peace”, I will quote a translation of the words of the Rashbam on the verses in the book of Genesis. There Rashbam explains what brought G-d to command Avraham (Abraham) to bind Yitzchak (Isaac) for a burnt offering. [ Just before Avraham was about to slaughter his son Yitzchak, he received a command to offer a ram as a burnt offering on the Temple Mount, in place of his son. ]Now here are the words of the Rashbam (to Genesis 22:1):

Wherever the phrase ahar ha-d’varim ha’elle is found, the context is linked to whatever comes before it. “After these events” where Avram killed the kings, The Holy One Blessed be He, said to him: “Do not fear, Avram”.
“And it came to pass after these events” when Yitzhak was born, Avraham was told etc. that Betu’el fathered Rivka.
Similarly, “after these events” where Mordechai informed on Bigtan and Teresh, King Ahashverosh raised up Haman who wanted to have Mordechai put to death, but the fact that Mordechai had saved the king’s life helped him here, and it was Haman who was hanged. Here, too, after the events when Avraham concluded a pact with Avimelech, obligating the descendants of both men, and gave him seven lambs [as a token of the pact], the Almighty was angry with Avraham for doing so, for behold, the land of the P’lishtim (Philistines) had already been given to Avraham; and also in (the book of) Yehoshua (Joshua), lots were used to divide the cities of the five P’lishtim leaders, being included within the boundaries of the land of Israel and the Holy One Blessed be He commanded, regarding them, do not not let even a single soul survive. Then the L-rd put Avraham to the test, harassed him and caused him sorrow, as is written: “has He tested you with suffering you are unable to remain silent” (Job 4:3, Rashbam to Gen. 19:11 ); ” and for their having tested G-d[Hashem]” (Exod. 17:7); Massa – trial – um’riva -and argument (also Exodus 17:7); “examine me, O G-d[Hashem], and test me” (Ps. 26:2).

In other words: “You became haughty because of the son I have given you – to conclude a pact between you and between their children.
Now go and offer him up as a burnt-offering, and see what will come of your pact!”

And afterwards I have found something similar in the midrash of Sh’muel:

“And the ark of Hashem remained in the land of the P’lishtim for seven months”. It was written [concerning Avraham’s oath]: “Take from my hand the seven lambs”.

The Holy One Blessed be He said to him: “You gave him seven lambs?

Rashbam concludes what does the Hebrew word “Nissa” in Genesis 22:1 connotate. He answers, harassed (namely, that G-d harassed Avraham after the Peace Treaty with Avimelech).

See also the words of the Chazoan Ish on Shviit, siman 24.

Excerpt from Why G-d let Bin-Laden Succeed! A Jewish Perspective on the Destruction of the World Trade Center in New York 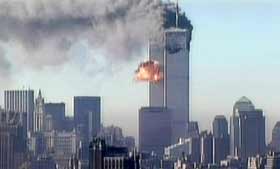 Q: I don’t understand were the gentiles of America punished because of their support of the dangerous plan of trading Israeli land for a peace treaty or were they punished because they did not move to the land of Israel?

A: Gentiles are not commanded to live in the land of Israel. For more details, see the article Most of the Prohibitions of the Bible Do Not Apply to Gentiles.

Q: Thou shalt not pressure Israel to make concessions for a peace treaty is one of the commandments of which gentiles were commanded???

A: Gentiles are commanded not to murder directly of indirectly. Jewish Law assumes that when Jewish money or property is handed over to violent Gentile gangsters, the gangster will not be satisfied with his initial gains (when he has a real opportunity to gain more). Rather, he will use more and more violence to extract additional money to the point of murder.

It unfortunately is not pragmatic for me to reveal all the halachic sources to prove this point, since Israel’s judicial system does not completely honor the right of free speech on halachic issues. (In the recent past, even rabbis such as Rabbi Shlomo Aviner, Rabbi Mordechai Eliyahu, and Rabbi Ovadia Yosef have been threatened {although not prosecuted } by Israel’s Attorney-General Elyakim Rubinstein.) Instead, you will just have to rely on your common sense that there is a direct connection between the tremendous rise in Palestinian-Arab violence and the Oslo Accords.

I wish to make it clear that G-d is angry with the Gentiles (as well as the secular government of Israel) for their part in the various “land for peace”, treaties, not only because the treaties help our enemies to murder. The treaties for example, rob parts of Biblical Israel from righteous Jews. And G-d forbids robbery, even in cases where a democratic majority supports the theft.

To quote from the words of Rabbi Tzvi Yehuda Kook on the subject (found in Mitokh Torat Hagoelet volume 4):

The definition of the Ramban is very clear. We are commanded by the Torah to have in our hands all of this land to its borders and boundaries that are detailed in the Torah and the land must not be in the hands of another nation.

The Mishna says (Shviit 9:2;Baba Batra 3:2;Ketuvot 13:10) that there are three regions in the land of Israel: “Judea, and the east bank of the Jordan, and the Galilee”…

The eastern bank of the Jordan is the land of Israel…

“All the land that you see, to you I will give it and to your offspring for eternity”. (Genesis 13:15) For eternity means for eternity! … {end of quote}

The “land for peace”, treaties also grant Gentiles the privilege to desecrate the Temple Mount for eternity.

In contrast to the attitude of the secular government of Israel, the Jews of the Second Temple period were adamant in their demands to remove Gentiles from the holiest sections of the Temple Mount. They posted signs warning Gentiles that they would be strongly punished if they were caught entering forbidden areas of the Mount. Indeed, archaeologists have found a stone from the Second Temple period that contained such a warning in Greek.

Sefer Hachinuch (commandment 362) makes it quite clear that the commandment to remove Gentiles from the holiest sections of the Temple Mount still exists even in our days.

And even those that might argue with Sefer Hachinuch’s conclusion cannot argue with the fact that the prophets, Yishayahu and Yehezkel (Isaiah and Ezekiel) clearly proclaim in their prophecies that an additional Temple will be rebuilt on the Temple Mount. These prophecies are hindered by the “land for peace”, treaties.

The New Israel UAE Peace Accord, Appropriately Called the Abraham Accord Brokered By President Trump Suspends Further Israeli Sovereignty Over Key Parts of Biblical Israel, Including the Temple Mount.

US President Donald Trump on Thursday responded to the agreement signed between the United Arab Emirates and Israel, saying that Israel has agreed not to apply sovereignty in Judea and Samaria.

In a press briefing, Trump said, “Israel is also suspending settlements in the West Bank, which is a big deal — a bold step toward achieving peace.”

However, he added that sovereignty is “not off the table. No.”

When asked if it was off the table permanently, Trump added: “No, right now, all I can say: It’s off the table. So I can’t talk about some time into the future; that’s a big statement.”

In a separate article about the deal, Jared Kushner, the President’s son-in-law and advisor stated:

“Israel has agreed to suspend those efforts at this time,” he said, noting that the deal precludes sovereignty at present. “And as a result, we’re going to focus on bringing these two countries together. This is really a historic breakthrough, and it shows that President Trump’s leadership, from the Riyadh speech until today — you see a much different Middle East than what he inherited. And hopefully, there’s a lot more good things to come.”

“This is an icebreaker between these two countries. This is the first Arab country to normalize relations with Israel in a long time — 26 years since Jordan. And what we’re going to hopefully see from there is more countries start to do the same.”

Kushner also said that the UAE-Israel deal may help the Palestinian Authority: “This could lead to a great deal for the Palestinian people, that — it’s a people that the President of the United States, President Trump, has not forgotten. And he’s — he’s endorsed the two-state solution. He wants to see the Palestinian people in a prosperous country of their own. And the groundwork has been laid for that, so I think we’ll be working very hard on those efforts in the — in the coming months and — and year.”

According to the report by https://www.jewishpress.com/news/eye-on-palestine/kushner-bin-zayed-israeli-relations-with-uae-depend-on-palestinian-state/2020/08/14/

But a more devastating contradiction of Netanyahu’s promises to Israelis came from presidential adviser and son-in-law Jared Kushner, who stated: “President Donald Trump was able to get Israel to agree to a two-state solution with the Palestinian people—and, for the first time in history, agree to a map that outlined the territory.”

Quote from the President:

This deal will allow much greater access to Muslims from throughout the world to visit the many historic sites in Israel — which the Muslims want to see very badly and have wanted to see for many, many decades — and to peacefully pray at the Al-Aqsa Mosque, which is a very special place for them.

A: The Talmud (in tractate Baba Batra pages 3 and 4), tells us that a dictator, Hurdus(Herod) murdered most of the sages and blinded a Torah scholar named Baba Ben Buta. Afterwards, King/Dictator Hurdus regretted his actions and asked Baba Ben Buta, what could he do to atone for his sins.

The scholar answered, “Hurdus extinguished the light of the world, for Torah is called light; as it is said in Mishlei(Proverbs) ‘for a mitzvah is a candle and Torah is light’; Hurdus should therefore go and engage in the light of the world, namely, by rebuilding the Temple.” (Baba Ben Buta used a verse in Yishayahu(Isaiah) chapter 2 verse 2 to prove this comparison).

A second opinion states that Baba Ben Buta compared Torah scholars to a person’s eyes based on Numbers 15:24.

Hurdus replied that this was too dangerous to do since it would anger the Roman empire.

Baba Ben Buta then suggested a clever trick to allow the Temple to be rebuilt without unduly angering Rome and Hurdus accepted this advice and rebuilt the Temple.

If America really wanted to atone for its part in causing the murder of Jews, by means of the Oslo accords, etc., I suggest that America enables Israel to rebuild the Temple in Jerusalem. Rebuilding the Temple would solve several spiritual and political problems simultaneously, given the reaction of the Moslem world to the elimination of the Mosques on the Temple Mount.