Balak: The Blessing of Isolation for Israel By Ariel Natan Pasko

“Hen Am L’Vadad Y’Shkone…” (from the root BaDaD*). “Behold, it is a nation that shall dwell alone, and not be reckoned among the nations.” *More on this later.

And so, Balaam’s attempted curse comes out of his foul mouth, as one of the biggest blessings in the Torah. Only with historical/messianic hindsight will the people of Israel fully understand it. But, let’s see what we can understand even now.

In this week’s Torah reading, the king of Moab frightened by Am Yisrael’s movement into the region, wants to hire a “prophet,” the renowned professional curser Balaam. Balak sends messengers and makes him an offer.

God comes to Balaam and says, “You shall not go with them! You shall not curse the people because they are blessed,” (Numbers 22:12).

After rebuffing Balak’s messengers a few times, God comes to Balaam and tells him, “If these men come to call for you again, go with them, but only speak the words I tell to you say…” (Numbers 22:20). 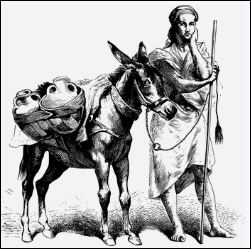 Knowing that Balaam intended to flout His command, the God of Israel then puts an obstacle in his way. An angel with a drawn sword that his donkey can see, but he can’t, to impress upon him, his lowly stature as a “prophet.”

Finally he gets to the mountaintop, overlooking the Israeli encampment, sets up shop and begins.

He [Balaam] took up his parable and said, “Balak the king of Moab has brought me from Aram, from the mountains of the east [saying], ‘Come, curse Jacob for me and come invoke wrath against Israel.’

How can I curse whom God has not cursed, and how can I invoke wrath if the Lord has not been angered?

For from their beginning, I see them as mountain peaks, and I behold them as hills; it is a nation that will dwell alone, and will not be reckoned among the nations,” (Numbers 23:7-9).

“…and not be reckoned among the nations.” As Targum [Onkelos] paraphrases, they will not perish along with the other nations, [when God finally judges the nations] as it says, “for I shall make an end of all the nations…” (Jeremiah 30:11); but Israel will be safe.

We have seen this in our time, with Israel’s early closure of it’s borders, and low CoronaVirus fatalities.

The Midrash HaGadol explains the verse a little differently, this refers to Israel’s mission to remain separate and distinct from the nations. From this blessing, that Balaam gave against his will, we understand what he really intended (see Sanhedrin 105a and the end of the parsha, where Balaam later sends in Moabite prostitutes to de-moral-ize the Jews, Numbers 25:1-9), so that the Jewish people assimilate into the nations, and be stripped of their religious values.

*I want to look at the word BaDaD, (to be alone/isolated/separate) further, through two dimensions. Starting with the Prat (individual/specific) level, and then moving toward the Klal (national/general) level.

1. The word BaDaD is related to the word BeDuD, which is the Isolation Ward in a hospital. A hint to our times?

2. The word BaDaD is related to the word BaD, a pole or staff. The carrying poles for the Aron HaKodesh (Ark of the Covenant), were called BaDim (pl.). Once inserted into the rings on the Ark, they were forbidden to be removed. They were separated from every other use, and dedicated to one purpose, carrying the Ark. So too, the Jewish people are separated from the nations and dedicated to the service of God.

3. The most common word for Jewish meditation is HitBoDeDut, from the root BaDaD. Popularized by Breslover Hasidim, Rabbi Nachman of Breslov, taught the importance of going out to the fields, or in some other manner, to isolate yourself, to be alone to talk to God. HitBoDeDut, is commonly understood that way.

But as Rabbi Aryeh Kaplan (in Jewish Meditation, Meditation and the Bible, and elsewhere) explains, HitBoDeDut, is the reflexive form of the verb, really meaning, to isolate yourself internally (from your sense of self, so that you can tune into God). Jewish meditation was an integral part of preparation to receive prophecy, something that will return to the Jewish people in messianic times, (Maimonides – Rambam, Igeret Taiman/The Epistle to Yemen).

4. This meditative process, it is said, is what led Avraham Avinu (Abraham our father) to discover and connect to God. It gave him the courage of his convictions, to stand up to Nimrod and the entire world, to declare there is only one God. He was BaDaD, alone in the world.

5. In discussing the newly founded State of Israel, Yisrael Eldad, Jewish philosopher and former ideologist of the pre-state LECHI underground, wrote in his book, “The Jewish Revolution,” about Abraham, and then described his decendents, the Jewish people, as a “nation of non-conformists.” This Eldad argued, is what kept them (BaDaD) separated from the nations, preserved their identity over the millennia, and gave them the ability, through their single minded dedication, to stand up to the world and declare independence.

6. I wrote in, “Israel, Stay Out of Entangling Alliances,” “Jews really don’t need to look beyond their own tradition for policy guidelines that warn not to get into “entangling alliances.” Traditional Jewish commentaries to these verses [about Balaam] explain that the Jewish people get their strength and prosperity not from alliances with other nations and cultures, but from their single-minded adherence [BaDaD – dedication] to their own unique Torah culture – Judaism, their single-minded worship of the God of Israel, their single-minded control over their own land and lives, and their single-minded defense of their own interests. In a nutshell, liberty, freedom and national independence.”

7. Rabbi Meir Kahane, used to always teach this parsha, through the Yalkut Shimoni (Balak 23), emphasizing, the halachic injunction to national isolation [BeDuD]. “Not only must the Jew not be afraid to be isolated [BaDaD], he is commanded to choose isolation. That is why all Jews must live in Eretz Yisrael (the Land of Israel), so as to be isolated from the nations and their cultures.”

He stressed that “…the Jew is not allowed to seek allies, that the very act of seeking allies is one of faithlessness to God. Thus we find the prophet Isaiah condemning the Jews of his time for turning to Egypt for aid against the Assyrians who were threatening them, “Woe to rebellious children,” says the Lord, who take counsel but not from Me; and who prepare a plan [MaSeCHa*], but not of My spirit, in order to add sin upon sin. Who go down to Egypt, but did not inquire of My mouth, to seek strength in Pharaoh’s stronghold and to take shelter in the shade of Egypt (Isaiah 30:1-2),” (Seek No Allies, Jewish Press, 1989).

*Interestingly, the word MaSeCHa, is also the word for mask, in Hebrew, like those being used today during the CoronaVirus

pandemic. So the Jews were covering themselves, protecting themselves, by allying with Egypt against Assyria, so they thought, and today against viruses.

PM Netanyahu has said he will bring up the sovereignty issue to the Knesset after July 1st. But what, is his plan? All of Eretz Yisrael belongs to God, and He gave it to the Jews to to live in and rule over.

HaShem through Balaam blessed the Jewish people, “Behold, it is a nation that shall dwell alone, and pay no attention to the nations.”

So I ask you, who’s stronger HaShem, or Trump, Johnson, the EU and UN?