Skip to Main Content
Most of the information here comes from a Washington State Dept . of Health article

It is posted here in a more internet friendly format. 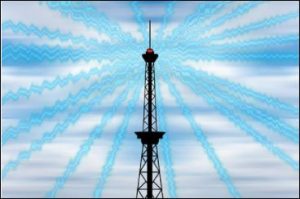 WHAT IS EMP AND
HOW IS IT CREATED?

The most important mechanism for Electromagnetic Pulse (EMP) production from a
nuclear detonation is the ionization of air molecules by gamma rays generated from the
explosion. These gamma rays ionize the air molecules by interacting with the air
molecules to produce positive ions and recoil electrons called Compton electrons. This
pulse of energy, which produces a powerful electromagnetic field, particularly within the
vicinity of the weapon burst, is called an electromagnetic pulse. EMP can also be
produced from non-nuclear sources, such as electromagnetic bombs, or E-bombs.

High-altitude nuclear detonations and electromagnetic bombs can generate EMP that
has the potential to damage or destroy electronic devices over widespread areas.
Electric power systems would also be at risk from surges produced by such weapons.
However, the EMP from a kiloton-range surface nuclear explosion would not be
expected to produce serious damage outside the radius of severe destruction from
blast.

A 1.4 Megaton bomb launched about 250 miles above Kansas would destroy most of
the electronics that were not protected in the entire Continental United States. During
the brief return to atmospheric testing in 1962, a 1.4 megaton nuclear weapon was
detonated over Johnston Island at an altitude of about 250 miles. The effects of EMP
were observed in Hawaii, 800 miles east of the detonation. Streetlights and fuses failed
on Oahu and telephone service was disrupted on the Island of Kauai.

EMP is not radioactive, but a pulse of energy produced as a side effect of a nuclear
detonation or electromagnetic bomb.

WHAT ARE THE HEALTH EFFECTS?

EMP has no known effect on living organisms, but can temporarily or permanently
disable electrical and electronic equipment.

WHAT ARE THE EFFECTS ON ELECTRONICS AND CARS?

When “detonated,” an EMP weapon produces a pulse of energy that creates a powerful
electromagnetic field capable of short-circuiting a wide range of electronic equipment,
particularly computers, satellites, radios, radar receivers and even civilian traffic lights.
Since EMP is electromagnetic energy traveling at the speed of light, all of the vulnerable
electronic equipment in the detonation zone could be affected simultaneously.

Society has entered the information age and is dependent on electronic systems that
work with components that are very susceptible to excessive electric currents and
voltages. Many of these electronic systems are controlled in some way by
semiconductors. Semiconductor devices fail when they encounter an EMP because of
the local heating that occurs. Failure of semi-conductive chips could destroy industrial
processes, railway networks, power and phone systems, and access to water supplies.

Some other notable collectors of EMP include railroad tracks, large antennas, pipes,
cables, wires in buildings, and metal fencing. Although materials underground are

partially shielded by the ground, they are still collectors, and these collectors deliver the
EMP energy to some larger facility. This produces surges that can destroy the
connected device, such as, power generators or long distance telephone systems.

WHAT CAN BE DONE TO PROTECT ELECTRONICS

There are two basic ways to protect or harden items against EMP effects. The first
method is metallic shielding. Shields are made of a continuous piece of metal such as
steel or copper. A metal enclosure generally does not fully shield the interior because of
the small holes that are likely to exist. Therefore, this type of shielding often contains
additional elements to create the barrier. Commonly, only a fraction of a millimeter of a
metal is needed to supply adequate protection. This shield must completely surround
the item to be hardened.

The second method, tailored hardening, is a more cost-effective way of hardening. In
this method, only the most vulnerable elements and circuits are redesigned to be more
rugged. The more rugged elements will be able to withstand much higher currents. This
method has shown unpredictable failures in testing, though it is thought it may be useful
to make existing systems less vulnerable.

EMP AS A WEAPON

The non-lethal nature of electromagnetic weapons makes their use far less politically
damaging than that of conventional munitions, and therefore broadens the range of
military options available. For weapons purposes EMP producing sources other than
nuclear detonations have been successfully developed. Several nations, with United
States at the forefront, are reported to have developed non-nuclear bombs capable of
generating EMPs. Electromagnetic bombs (E-bombs) are specialized, non-nuclear tools
designed to destroy information systems. These devices are primarily intended for
battlefield application, and their effects would be restricted to a relatively small area.

An EMP shock wave can be produced by a device small enough to fit in a briefcase.
High Power Electromagnetic Pulse generation techniques and High Power Microwave
technology have matured to the point where practical E-bombs are becoming
technically feasible, with new applications in both Strategic and Tactical Information
Warfare. Although much of this work is classified, it’s believed that current efforts are
based on using high-temperature superconductors to create intense magnetic fields.
The development of conventional E-bomb devices allows their use in non-nuclear
confrontations to defeat an enemy without causing loss of life.

Regardless of the method of delivery, experts agree that EMPs can be powerful enough
to cripple electronic wiring and circuitry over a geographic area as large as several
square miles, posing a real threat to the nation’s critical infrastructure. In addition, the
Defense Department’s reliance on satellites and commercial computer equipment to

conduct real-time command and control of forces around the world also puts military
operations at risk, experts say. It is this aspect of the EMP effect which is of military
significance, as it can result in irreversible damage to a wide range of electrical and
electronic equipment, particularly computers and radio or radar receivers.

US Army Corps of Engineers,