Skip to Main Content
Shmot/Exodus 10:22 as translated by Sefaria 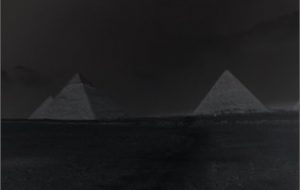 Moses held out his arm toward the sky and thick darkness descended upon all the land of Egypt for three days.

Rashi as translated by Sefaria

ויהי חשך אפלה … שלשת ימים — there was darkness of gloom when no man saw another during those three days, and there was moreover another period of three days’ darkness twice as thick as this when no man rose from his place: one who happened to be sitting when this second period of darkness began was unable to rise, and one who was then standing was unable to sit down. And why did He bring darkness upon them? Because there were wicked people amongst the Israelites of that generation who had no desire to leave Egypt, and these died during the three days of darkness so that the Egyptians might not see their destruction and say, “These, (the Israelites) too have been stricken as we have”.

And a further reason is that the Israelites searched (the darkness came just in order that they might do this) and saw their (the Egyptians’) jewels, and when they were leaving Egypt and asked them for their jewels, and they replied, “We have none at all in our possession”, they answered them, “I have seen it in your house and it is in such and such a place” (cf. Midrash Tanchuma, Bo 1 Exodus Rabbah 14:3).