Skip to Main Content
Rabbi Aryeh Kaplan translates Dvarim / Deuteronomy 22:5 in the following way:
No male article* shall be on a woman, and a man shall not wear a woman’s garment. Whoever does such practices is revolting to G-d your L-rd (- instead of o, was inserted here by the editor, not by Rabbi Kaplan).

* male article. Clothing (Septuagint). But this also includes weapons (Nazir 59a), and, according to some, tefillin and tzitzith ( Targum Yonathan ; cl. Eruvin 96a; Orach Chaim 38:3 in Hagah). 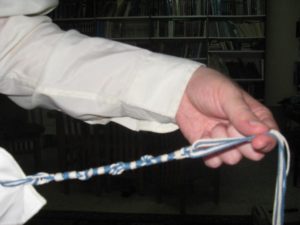 In theory, at least according to Rabbi Moshe Feinstein, a woman who wants to fulfill (as extra credit) the mitzva of Tzitzit could do so, if she has a 4 cornered garment that looks different from a male garment*.