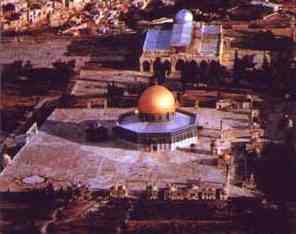 According to Professor Mordechai Kedar the real Al Aqsa Mosque is located near Ji’irrana, a village located between Mecca and Taaf in the Arabian Peninsula. For political and historical reasons as explained in the article at http://www.israelnationalnews.com/Articles/Article.aspx/19315 Muslim politicians invented a fairy tale 50 years after the death of their so-called prophet that relocated the Mosque to the Temple Mount.
During the British Mandate period and during the Jordanian control of East Jerusalem the liars of Islam clearly identified the so-called El Aqsa Mosque as the Silver Domed building on the southern end of the Temple Mount Complex. After the 6 Day War in the wake of Israel’s conquest of East Jerusalem, propaganda needs made Muslims redefine what is considered El Aqsa to strengthen their claims of seizing the entire Temple Mount.

The Root of the Issue is A Theological Problem

One wonders why the al Aqsa Mosque is of such importance to the Muslims and why they have accorded it such prominence that it is becoming accepted as one of the basic principles of their faith. The answer lies in the fact that Islam defines itself as a religion that did not enter the world to live in peace with Judaism and Christianity, the religions that preceded it, but as a universal religion that is meant to obliterate them and take over the world. Islam sees itself as “Din al-Haqq,” the true religion, and Judaism and Christianity as “Din al-Batil,” the false religions. The Muslims fear that the Jewish people’s return to their land, cities and the site of their Temples will grant Judaism the status of a vibrant, active and true religion, posing a theological threat to the very existence and raison d’etre of Islam.

That is the reason that all Jewish activity on the Temple Mount, especially Jewish prayer, infuriates them, and they will do everything, including spreading prevarications and outright lies, to prevent the Jews from returning to the places from which they were exiled almost 2000 years ago. That is what makes the conflict over Jerusalem the basis of a theological struggle whose source is the Muslim world’s inability to recognize the history and religious rights of non-Muslim believers, all of whom are slated to disappear, according to Islam.

All the other aspects of the conflict, nationalistic, political or legal, are layers of camouflage hiding the real dispute, the theological one, between Israel and its neighbors (here ends the translated quote of Prof. Kedar).

In the future, Kedar the Son of Yishmael will bring sacrifices to the altar of the G-d of Israel (as defined theologically by the Jewish people) on the Temple Mount

The sons of Yishmael, took on the Islamic religion. In the future, the prophet Yishayahu (Isaiah) tells us in Chapter 60 verse 7 (as translated by the Sefaria.org web site)
All the flocks of Kedar shall be assembled for you, The rams of Nebaioth shall serve your needs; They shall be welcome offerings on My altar, And I will add glory to My glorious House.
In Bereishit (Genesis) 25:13 we learn that Kedar and Nebaioth are two sons of Yishmael.

It should be noted that currently, in contrast to the future, although most Muslims are Monotheists, they have a fundamental flaw in the definition of the identity of the Holy One Blessed Be He (Tosafot Chagiga 3b, Rashi, Ramban and Kli Yakar to Devarim/Deut. 6:4, Aruch Hashulchan O.C. 156:4, Igrote Moshe Y.D. 2:7). This is in addition to the theological flaws discussed in the article When Is It Permitted to Bow to Men and When Is Bowing Considered Forbidden Intermediary Worship , According to Rabbeinu Nissim . For those that read Hebrew see also, צורת הלבנה בבית תפלה של ישמעאלים הנקרא מאצעטא – קישוט או עבודה זרה? – עמדת חוט המשולש