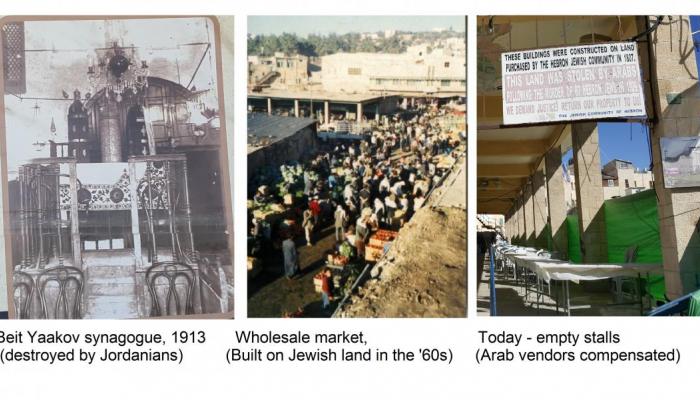 Lovers of Hevron/Hebron, Like Calev (Caleb) of the Bible Did End Up Gaining Extra Portions of Land in Israel Because of the 17th of Elul Elections

Who Was Calev (commonly called Caleb in some Bible translations)?

‘Send out men for yourself to explore the Canaanite territory that I am about to give the Israelites. Send out one man for each patriarchal tribe. Each one shall be a person of high rank.’

Moses sent them from the Paran Desert at G-d’s bidding, All the men were leaders of the Israelites.

Their names were as follows:

From the tribe of Reuben, Shamua son of Zakur.

From the tribe of Simeon, Shaphat son of Chori.

For the tribe of Judah, Caleb (Calev) the son of Yefuneh….

When Moses sent [the men] to explore the Canaanite territory, he said to them, ‘Head north to the Negev, and then continue north to the hill country. See what kind of land it is. Are the people who live there strong or weak, few or many? Is the inhabited area good or bad? Are the cities where they live open or fortified? Is the soil rich or weak? Does [the land] have trees or not? Make a special effort to bring [back] some of the land’s fruits.’ The men headed north and explored the land, from the Tzin Desert all the way to Rechov on the road to Chamath. On the way through the Negev, they came to Hebron where [they saw] Achiman, Sheshai and Talmi, descendants of the Giant. Hebron had been built seven years before Tzoan in Egypt. When they came to Cluster Valley (Nachal Eshkol), they cut a branch and a cluster of grapes, which two men carried on a frame. Because of the grape-cluster that the Israelites cut there, the place was named Cluster Valley.

Calev (Caleb) Who According to Our Sages Went To Hebron to Pray at the Cave of the Patriarchs That He Would Not Be Swayed By the Plot of the Anti-Zionist Spies, Gives a Good Report About the Land of Israel and Says We Are Able To Conquer It

At the end of forty days they came back from exploring the land. When they arrived, they went directly to Moses, Aaron and the entire Israelite community, [who were] in the Paran Desert near Kadesh. They brought their report to [Moses, Aaron], and the entire community, and showed them fruit from the land. They gave the following report: ‘We came to the land where you sent us, and it is indeed flowing with milk and honey, as you can see from its fruit. However, the people living in the land are aggressive, and the cities are large and well fortified. We also saw the giant’s descendants there. Amalek lives in the Negev area, the Hittites, Yebusites and Amorites live in the hills, and the Canaanites live near the sea and on the banks of the Jordan.’ Caleb (Calev) tried to quiet the people for Moses. ‘We must go forth and occupy the land,’ he said. ‘We can do it!’

‘We cannot go forward against those people!’ replied the men who had gone with him. ‘They are too strong for us!’

14:1 The entire community raised a hubbub and began to shout. That night, the people wept.
14:2 All the Israelites complained to Moses and Aaron. The entire community was saying, ‘We wish we had died in Egypt! We should have died in this desert!
14:3 Why is G-d bringing us to this land to die by the sword? Our wives and children will be captives! It would be best to go back to Egypt!’
14:4 The people started saying to one another, ‘Let’s appoint a [new] leader and go back to Egypt.’
14:5 Moses and Aaron fell on their faces before the whole assembled Israelite community.
14:6 Among the men who had explored the land, Joshua son of Nun and Caleb (Calev) son of Yefuneh tore their clothes in grief.
14:7 They said to the whole Israelite community, ‘The land through which we passed in our explorations is a very, very good land!

14:8 If G-d is satisfied with us and brings us to this land, He can give it to us – a land flowing with milk and honey.

14:9 But don’t rebel against G-d! Don’t be afraid of the people in the land! They have lost their protection and shall be our prey! G-d is with us, so don’t be afraid!’

14:10 The whole community was threatening to stone them to death, when G-d’s glory suddenly appeared at the Communion Tent before all the Israelites.

And they gave Hebron to Caleb (Calev), as Moses had spoken; and he drove out from there the three sons of the giant.

I pointed out the less obvious reward of Calev (Caleb) and his Zionist friend, Yehoshua (Joshua).

Here is an excerpt of what I wrote before Israel’s recent elections in September, which were held on the 17th of the Hebrew month of Elul:

Israeli Elections are on The 17th of Elul. This is the Date When Yehoshua and Calev benefitted from the death of 10 Religious Anti-Zionists

In an amazing coincidence in history, there is a linkage between World War I and World War II and the fate of the Biblical spies (meraglim) that Moshe (Moses) sent on a spy mission to spy out the land of Israel for the sake of fulfilling the Biblical commandment to conquer the land of Israel. This commandment according to Ramban’s addition to Sefer Hamitzvot still exists to this very day (although the Vilna Gaon told his followers that different tactics such as land purchases, Jewish agricultural development and establishing new settlements in Israel would be the emphasis for successful conquest in contrast to the military tactics used by Yehoshua. More details about these new tactics are explained at https://vilnagaon.org/israeli-settlements/ ).

Some commentaries add that besides getting valuable military information a second goal of Moshe when he sent out the spies on their mission was to provide a positive report about the land of Israel to encourage the nation to desire to enter the country, despite the risks.

What is the linkage between World War I and World War II and the fate of the Biblical spies?

According to Jewish tradition on the 17th of Elul (Shulchan Aruch, O.C.581:2), the 10 Religious Anti-Zionist spies who spread an evil report about the land of Israel died in a plague. The symptoms of that plague were measure for measure for their evil report (see Bamidbar {Numbers} 14:37 with Rashi’s commentary).

Yehoshua and Calev that brought back a positive report about the land of Israel actually benefitted from that plague.

In Bamidbar (Numbers) 14:38 the verse states: “But Yehoshua the son of Nun and Calev the son of Yephunneh remained alive of the men who went to tour the Land”. Rashi comments. What does Scripture mean by saying, “remained alive of the men”? It teaches that they took the spies’ portion in the Land, and stood in their place for life” (see also Talmud Baba Batra 118b which affirms this idea).

Until The 17th of Elul Elections Netanyahu and to Some Extent the Shas Party Have Been Harmful to the City of Hebron Despite Paying Lip Service Of Being Friends of Hebron.

Netanyahu and the Shas party supported the Wye River Agreements and the Hebron Accord that limited Jewish settlements in Hebron to 3% of the Holy City and gave control of most of the city to Palestinian Terrorists in the PA authority. They made the city much more dangerous for any Jew who wanted to live in or visit the Holy City.

During the subsequent years Netanyahu used various beauracratic regulations to limit Jews from purchasing property from Arabs who wished to sell property in the area and even when a purchase went through, he stopped the Jews from moving in by demanding approval from the Defense Ministry.

The Change That Took Place in the 17th of Elul Elections

In the past Netanyahu was able to promise to do right-wing actions and then backtrack on his promises after the elections. The fear of the Boogey-Man of a new radical surrender government of the left coming to power doing much worse, led much of his supporters to forget his betrayals and vote for him anyway the next time around.
As a result of Netanyahu finally not being able to excite his traditional base to go to the voting booth in the 17th of Elul/17th of September election, together with the fact that corruption charges were issued against Netanyahu which cut out Netanyahu’s ability to make a rotation power sharing agreement with the Blue and White party, the end result was to force Netanyahu to move to the right.
In order to block the Blue and White party from getting the 61 Knesset seats needed to knock out Netanyahu from office, Netanyahu was forced to allow a right-wing rival, Naftali Bennett to become Defense Minister.

Defense Minister Naftali Bennett Removes the Government Obstacles to New Jewish Building in Hebron Which is Expected to Double the Jewish Population in the Holy city.

212 years after it was purchased by the Jewish community, an important piece of property has passed a key hurdle in finally being rebuilt. What became the Arab wholesale market in the 1960s was once home to a thriving Jewish community including the Beit Yaakov synagogue and other sites which the Jordanians destroyed.

On December 1, 2019 Defense Minister Naftali Bennett ordered the IDF Civil Administration to notify the Palestinian Authority’s Hebron Municipality, which controls 80% of the city, of its plans to rebuild the site.

The land in question is on the Israeli’s side of Hebron, about a 5 – 10 minutes walk from the Tomb of the Patriarchs and Matriarchs and directly in front of the historic Avraham Avinu neighborhood.

After Israel reclaimed Hebron in the Six Day War of 1967, the government continued to allow Arab merchants to lease the fruit and vegetable stalls the Jordanians built. When Jewish residents attempted to refurbish the empty stalls as habitable living quarters, the Hebron Municipality took the issue to the Israeli Supreme Court.

Now the red tape has been mostly cleared for the old stalls to be demolished to make way for as many as 70 new residential housing units. The ground floor has been reserved as market stalls to fulfill court demands.

The decision was made after a series of discussions held by the Defense Minister with the Coordinator of Government Activities in the Territories, the Civil Administration, the General Security Service and other security agencies.
Representatives of the Jewish community responded positively to the announcement, calling it “an act of historic justice. We have been looking forward to it for 90 years.” They also thanked Prime Minister Benjamin Netanyahu, former Justice Minister Ayelet Shaked, former Defense Minister Avigdor Lieberman, and a long list of ministers, Members of Knesset, activists, friends and supporters of Hebron, who worked tirelessly to have the area repatriated by descendants and supporters of the original residents.

The 1929 massacre in which mobs of angry local Arabs raped, tortured and murdered their Jewish neighbors resulted in the British deporting all Jewish residents of the city. The abandoned property was taken over by the Arab residents and later by the invading Jordanians in 1948 who banned all Jews from visiting the city.

Comment by Shlomo Moshe Scheinman:
Although Naftali Bennett has done some good in Hebron, I nevertheless do not support his political party.