34:7
1) גבול צפון means THE NORTHERN BOUNDARY.
2) מן הים הגדול תתאו לכם הר ההר FROM THE GREAT SEA YE SHALL MARK OUT YOUR LINE UNTO MOUNT HOR, which is at the north-west corner, and its top slopes down and goes to the sea and there is some of the breadth of the sea inward of it and outside it.
3) תתאו means, YE MUST MOVE IN A SLANTING DIRECTION so as to move from west to north to Mount Horayot
4) תתאו is an expression denoting “a slanting turn”, just as in (1 Kings 14:28) “the slanting chamber (תא) of the runners” and (Ezekiel 40:10) “and the slanting chambers (תאי) of the gate”. The תא is a chamber with a sloping roof, which is called in O. F. apendiz; it is called תא because it leans and slopes (a lean-to or panthouse).
34:8
1) מהר ההר FROM MOUNT HOR you shall turn about and go along the northern boundary towards the eastern side and you will arrive at the “Entrance to Hamath”, which is Antioch.
2) תוצאות הגבול means, THE END OF THE BOUNDARY. In every passage where it is said “the end of the boundary”, either the boundary ends there entirely, not passing further on at all (cf. Rashi on v. 5), or from there it spreads and widens, projecting from the straight line backwards to extend itself further on in a more slanting direction than the first widening. And relative to the measurement of the first breadth it calls it תוצאות (the goings forth, the endings), because there that measurement ends.
34:9
1) והיו תוצאתיו חצר עינן AND THE GOINGS OUT OF IT SHALL BE AT HAZAR-ENAN — This place was the end of the northern boundary. It follows therefore that Hazar-Enan was in the north-east corner. And from there, “you shall then turn yourselves” toward the eastern border.

Mount Hor is the Taurus Emmanuas, north of Antioch (Antakya) on the Turkish Syrian border. This is the opinion of the ancient Targumim (Translations), Rashi and other Rishonim. The Achronim suggested other theories but they are not well based.

With Blessing and Esteem, 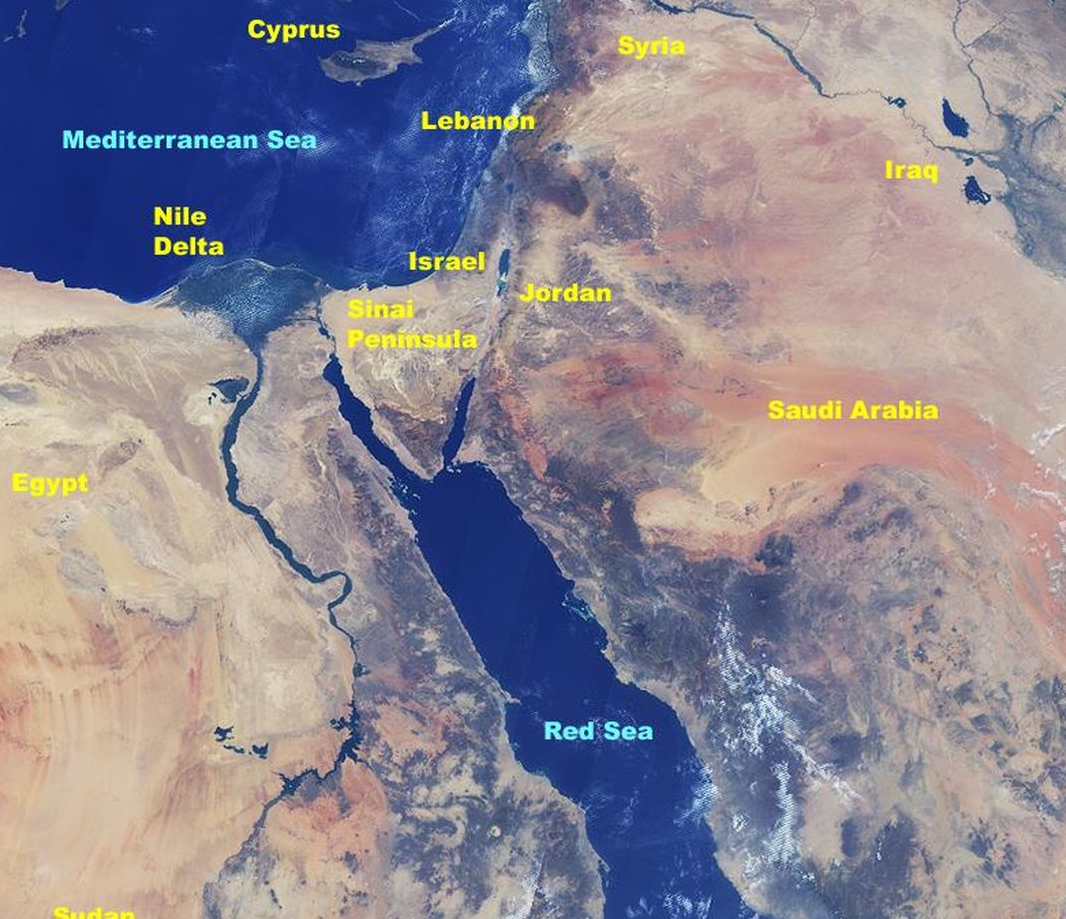 He took him outside and said, “Look toward heaven and count the stars, if you are able to count them.” And He added, “So shall your offspring be.”

And because he put his trust in the LORD, He reckoned it to his merit.

Then He said to him, “I am the LORD who brought you out from Ur of the Chaldeans to assign this land to you as a possession.”

And he said, “O Lord GOD, how shall I know that I am to possess it?”

He brought Him all these and cut them in two, placing each half opposite the other; but he did not cut up the bird.

Birds of prey came down upon the carcasses, and Abram drove them away.

As the sun was about to set, a deep sleep fell upon Abram, and a great dark dread descended upon him.

And He said to Abram, “Know well that your offspring shall be strangers in a land not theirs, and they shall be enslaved and oppressed four hundred years;

but I will execute judgment on the nation they shall serve, and in the end they shall go free with great wealth.

As for you, You shall go to your fathers in peace; You shall be buried at a ripe old age.

And they shall return here in the fourth generation, for the iniquity of the Amorites is not yet complete.”

When the sun set and it was very dark, there appeared a smoking oven, and a flaming torch which passed between those pieces.

On that day the LORD made a covenant with Abram, saying, “To your offspring I assign this land, from the river of Egypt to the great river, the river Euphrates:

the Hittites, the Perizzites, the Rephaim,

the Amorites, the Canaanites, the Girgashites, and the Jebusites.”

Rashi: In the Merit of the Sacrifices They Will Remain (or be established) In It

‘והאמין בה AND HE BELIEVED IN THE LORD — He did not ask Him for a sign regarding this; but in respect to the promise that he would possess the land he asked for a sign, inquiring of God, במה אדע “By what sign shall I know [that I shall possess it?]” (Genesis 15:8).

ויחשבה לו צדקה AND HE ACCOUNTED IT UNTO HIM FOR RIGHTEOUSNESS — The Holy One, blessed be He, accounted it unto Abraham as a merit, because of the faith with which he had trusted in Him. Another explanation of במה אדע is: he did not, by these words, ask for a sign regarding this promise that he would possess the land, but he said to Him, “Tell me by what merit they (my descendants) will remain in it (the land).” God answered him, through the merit of the sacrifices (Taanit 27b).