Excerpt from The Sequence of The 6 Biblical Days of Creation In Light of Science .

Precedents For A Gap In Time Between A Divine Decree and Its Fulfillment; such as the Promise Made to Avraham (Abraham) That One Day His Seed Would Rule Over The Territory Extending from Sharm El-Sheik in the Sinai Until Northern Turkey

n Breishit (Genesis) chapter 15, at the covenant of the pieces (in Hebrew pronounced as Brit Ben Habetarim) G-d informs Avram, whose name years later will changed by to Avraham (Abraham) the following Divine decree (as translated by the Jerusalem Bible published by Koren) concerning the future course of history:”Know surely that thy seed shall be a stranger in a land not theirs, and shall serve them; and they shall afflict them four hundred years; and also that nation, whom they shall serve, will I judge: and afterwards shall they come out with great substance. And thou shalt go to thy fathers in peace; thou shalt be buried in a good old age. But in the fourth generation they shall come back here, for the iniquity of the Emori is not yet full. And it came to pass, that, when the sun went down, and it was dark, behold a smoking furnace and a burning torch that passed between those pieces. In the same day the L-rd made a covenant with Avram, saying, To thy seed have I given this land, from the river of Mizrayim {Egypt} to the great river Perat {Euphrates}: the Qeni, and the Qenizzi, and the Qadmoni, and the Hitti, and the Perizzi, and the Refa’im, and the Emori, and the Kena’ani, and the Girgashi, and the Yevusi”.Rashi, in his commentary to Breishit (Genesis) 15:19, (basing himself on midrash, Breishit Rabba) states, “Ten nations are {mentioned} here, but he gave them only seven nations, while the {other} three, Edom, Moav and Ammon – which are the Qeni, the Qenizzi and the Qadmoni are destined to be an inheritance in the future, as it is stated, (Yishayahu/Isaiah 11:14) “Upon Edom and Moav (Moab) they shall put forth their hand and the children of Ammon shall obey them” {end of quote}.

We see clearly here, a large gap in time between the Divine Decree and the total fulfillment of that decree. Thousands of years have gone by and we still have not seen total fulfillment. As a side point, see Daat Mikra commentary to Yehoshua {Joshua} 1:4, and Rabbi Shimon and Rabbi Leizer Ben Yaakov to Yerushalmi 6:1 which imply that most of Turkey will one day become part of Greater Israel. This also seems to fit in with the viewpoint of the Talmud Bavli, since the distance between the northwestern edge of Turkey before the sea (Istanbul) to the southern tip of Sinai (Sharm el-Sheikh) according to  http://www.distancefromto.net/ is 1536.87 kilometers. Four hundred parsa , which is the length of Greater Israel (according to Megilla 3a, Baba Kama 82b, and Menachot 64b) is also 1536 kilometers using a cubit of 48 centimeters (Rabbi Chaim Naeh’s standard cubit). The same web site gives nearly the same distance from Sharm el-Sheikh to Kumkale (1535.48 km) while the distance from Sharm el-Sheikh to Sinop is 1572.19 km, which fits well with a cubit of 49 centimeters (400 parsa = 3,200,000 cubits), a cubit sometimes used by Rabbi Chaim Naeh, for the sake of stringency (“lechumra”).

An online printed translation of Kol Hator into English can also be found at http://www.israel613.com/books/KOL_HATOR.pdf

This is the book which goes into depth about the concept of Mashiach Ben Yosef and practical natural steps to bring the redemption. For the sake of ease, I will use that translation rather than making my own.

I also stored a backup copy at this web site in case the link above becomes outdated; KOL_HATOR

How will this be accomplished? To what extent are we obligated to act to accomplish this during the awakening from below?
Our Rabbis said that in the future Jerusalem will expand as far as Damascus. In the future Jerusalem will extend as far as the Great Sea (the Mediterranean). The procedure will be gradual. Our Sages maintained that the redemption of Israel will be like the first rays of the dawn: just as the dawn comes gradually, so will Israel’s settlement come gradually, and likewise with regard to building it, etc. The building will be accomplished even in poverty, as is written: “that God has established Zion and the poor of His people take shelter in it” (Isa. 14:32). The building will start from even one stone: “behold I am laying a foundation stone in Zion, a tried stone, ” because God wishes to put us through a severe trial, by building Zion from even a single stone, and this “will be a precious cornerstone, a secure foundation” [Isa. 28:16], etc.
Our work consists of fulfilling the commandment of expansion: “expand the site of your tent” [Isa. 54:2]. “The commandment of expansiveness” means ‘expand, do not restrain yourselves’. The verse teaches us that we must not stand still; we must not retreat, God forbid, when confronting any obstacle. Yet another verse, connected with the commandment of expansion, hints at the name of the Gaon; as known, for in gematria the verse: “expand, extend, strengthen” together equal [the name of the Gaon together with his father’s name]. In that same chapter it states [Isa. 54:7] “with abundant mercy I will gather you.” The term “I will gather you” is the great mission of the Gaon, as explained above in chapters 1 and 3. According to our Sages, the method used should be the equally measured gardens [Baba Batra 75b] mentioned in connection with the building and settlement of Jerusalem. Practically, there should be complete equality on the line of equality for all, as explained in the Tosafot concerning the building of Jerusalem. This approach is also included in the Gaon’s principle regarding the verse “a perfect and just stone, ” another verse in which the Gaon saw a hint to his own name. {end of quote}

Below is a picture of an ancient measuring stone found near the Kotel according to https://thekotel.org/en/15111/

Some of my readers might not be aware that stones were once used to measure weights so I included the picture. 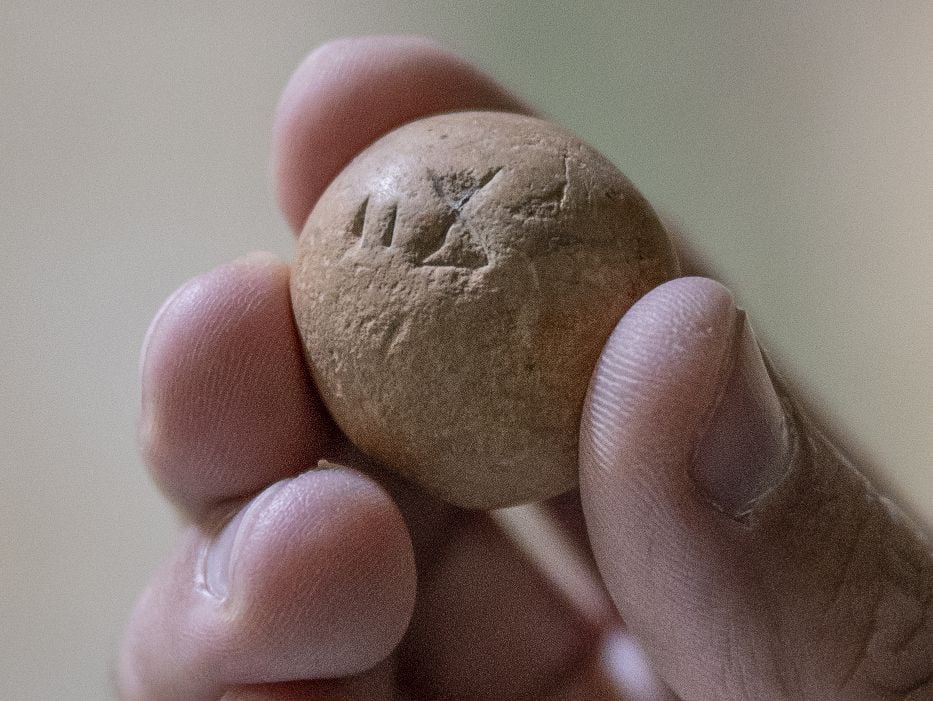